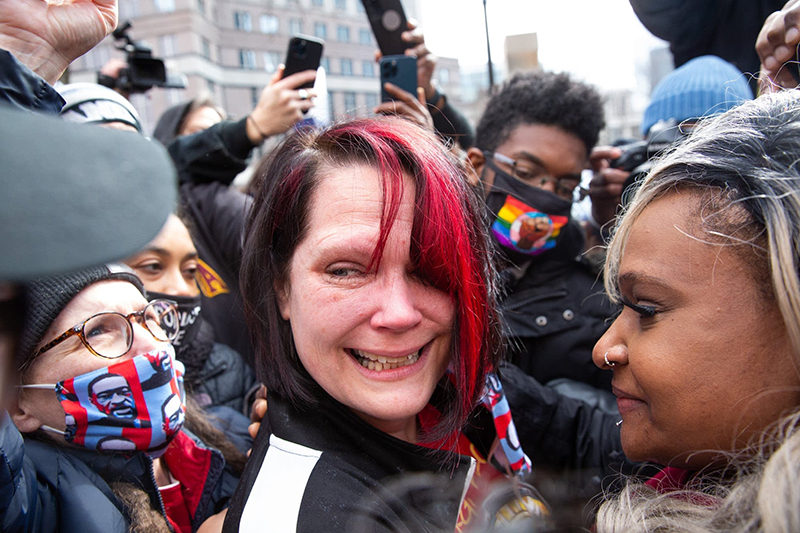 George Floyd's girlfriend Courtney Ross smiles after finding out that Derek Chauvin was convicted of murder in Floyd's killing outside of the Hennepin County Government Center in Minneapolis on Tuesday. Evan Frost/MPR News

A Hennepin County jury on Tuesday found ex-Minneapolis police officer Derek Chauvin guilty of murder and manslaughter in the killing of George Floyd.

In one of the most consequential verdicts in Minnesota history, Chauvin was found guilty on all counts, including second-degree unintentional murder, third-degree murder and second-degree manslaughter in Floyd’s killing last May.

Chauvin was one of several officers called to a south Minneapolis street corner May 25 on a report of a man allegedly using a counterfeit $20 to buy cigarettes at a corner store. He arrived to find other officers struggling to arrest Floyd and get him in a squad car as Floyd pleaded that he was claustrophobic.

The encounter turned fatal as officers pulled Floyd to the ground to subdue him during the arrest.

Bystander video captured Chauvin with his knee pinned against Floyd’s neck for more than nine minutes as the man lay pinned to the street, handcuffed and face down, pleading that he couldn’t breathe while people shouted from the curb that Floyd was dying.

Weeks of trial testimony revolved around a basic question: Who or what was responsible for Floyd’s death? The defense pointed to Floyd’s health conditions and the drugs in his system. The prosecution put the blame on Chauvin’s actions and his knee on Floyd’s neck.

Jurors got the case Monday around 4 p.m. following a marathon day of closing arguments in the former Minneapolis police officer’s murder case. They deliberated for several hours Monday and resumed at 8 a.m. Tuesday, spending a total of about 10 hours deliberating.

Chauvin and three other officers were fired over the incident. The other officers have been charged with aiding and abetting. They’re expected to go on trial this summer.

Closing arguments on Monday began with prosecutors painting the ex-officer as a cop who disregarded his training, his department’s use of force rules and Floyd’s suffering as the man lay handcuffed and pinned to the street under Chauvin’s knee.

Defense attorney Eric Nelson worked to sow reasonable doubt in the jurors’ minds as he recounted Chauvin’s actions and Floyd’s health and the drugs in his system.

He argued that bystanders watching Floyd’s arrest and restraint were a concern for Chauvin.

The defense also urged jurors not to focus on the nine-plus minutes that Chauvin’s knee was on Floyd’s neck but to think about the prior 17 minutes as officers struggled to get Floyd to comply with orders and get in the back of the squad car as Floyd resisted saying he was claustrophobic.

Prosecutor Jerry Blackwell got the last word in, when the state got a chance to push back against many of Nelson’s points.

Citing the questions raised by the defense about whether Floyd’s health conditions, including an enlarged heart, killed Floyd, Blackwell said to jurors before they began deliberating: “You were told, for example, that Mr. Floyd died because his heart was too big. The truth of the matter is that the reason George Floyd is dead is because Mr. Chauvin’s heart was too small.”