Legionnaire of the Year: A helping hand whenever needed 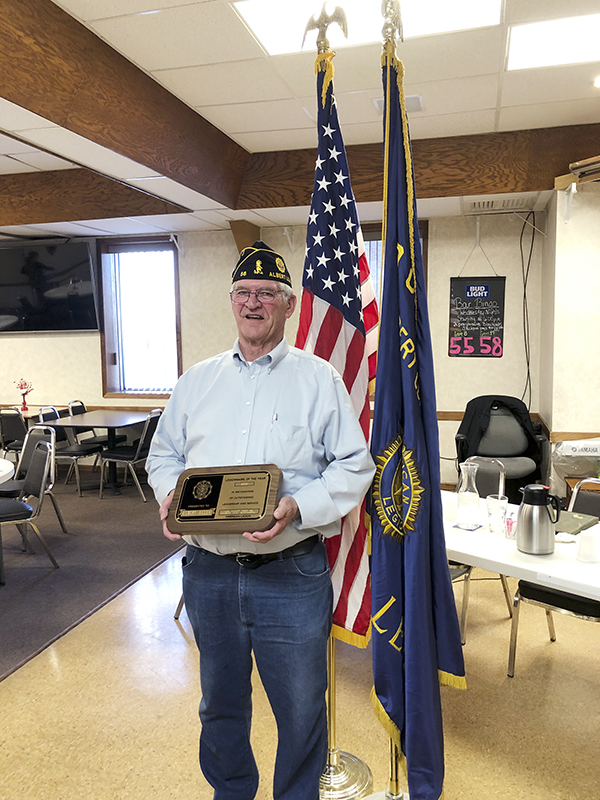 Albert Allen was named Legionnaire of the Year on Monday for the Albert Lea American Legion. Provided

The Albert Lea American Legion’s Legionnaire of the Year is known as someone who gives back to honor veterans and their families.

Albert Allen received the award, which is selected by the winners from the previous three years, during a ceremony Monday night at the Legion.

“I’m still in awe,” Allen said during an interview Thursday of the recognition.

Allen was born and raised in Alden and graduated from Alden-Conger Public School in 1962. He joined the National Guard in 1964 and attended basic training at Fort Jackson in South Carolina and advanced individual training at Fort Ord in California. He then attended camp at Camp Ripley for six years.

He recalls one of his duties was being the driver to Capt. Robert Haskins, commander of Company A, 1st Battalion, 135th Infantry Division in Albert Lea. He also worked a lot with riot control in Albert Lea.

He received an honorary military discharge in 1970 and from then on went to be active in the American Legion, first in Alden — even serving as commander for a year — and in 2004 joined Post 56 in Albert Lea.

He said through his service with the Honor Guard, he hopes he can not only honor the veterans who have died but also support their families and show them — especially the younger family members — the difference their loved one made.

“The flag means so much to me, and I guess that’s why I volunteer for all the flag-raising ceremonies I can get on,” Allen said. “I just want the younger generation to understand what the flag is all about, what it stands for, the rights that you have with it — because of veterans, what’s been given to you to enjoy those rights. That’s what it’s all about.”

Wes Halverson, who presented the award, said Allen gives a helping hand “whenever and wherever it is needed.”

He has donated a large screen television for the Legion’s event center, helped purchase a new refrigerator for the organization and paid to put in security lights in the alley between the building.

Allen also serves on the board for the Albert Lea Legion and volunteers in the presentation of the flags for civic and charitable events. Halverson said Allen also participates in Post Everlasting, a ceremony to recognize families of veterans who have died, along with sporting events and other events where the country’s flag is represented.

“Whenever there is a request for help, Albert never refuses, whether that be serving breakfast or scrubbing floors because he just wants to be sure our Legion club stays in existence and is well represented,” Halverson said.

Allen and his wife, Sue, have two children and three children.

The couple encouraged people to continue supporting the Legion and the veterans in the community and to remember what the country’s flag represents.