Funeral services for Mary Rita Johnson will be held at 11:00 AM on Thursday, April 15, 2021 at the St. Theodore Catholic Church, Albert Lea. Father Kurt Farrell will officiate. Visitation will take place from 5 – 7 PM on Wednesday at Bonnerup Funeral Service, Albert Lea, and continue one hour prior to the service at the church on Thursday. Interment will take place at St. Theodore Catholic Cemetery. 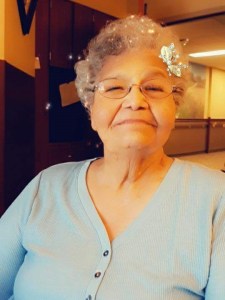 Mary was born on May 22nd, 1936 to Eliceo Perez and Josephine Hernandez. She Married Stanley Melvin Johnson on May 26th, 1970 in Sioux Falls, South Dakota. They raised nine children together.

Mary worked hard her whole life working in cotton, bean fields and Delgado’s potato farm. She also worked in factories such as Land O’Lakes, Queens and finally at the Albert Lea Tribune before retiring.

Mary’s most precious thing in life was her family and God. She loved to travel, dance and sing. She also enjoyed having friends and family over to play cards. She was loved by all who knew her, and she will be greatly missed.