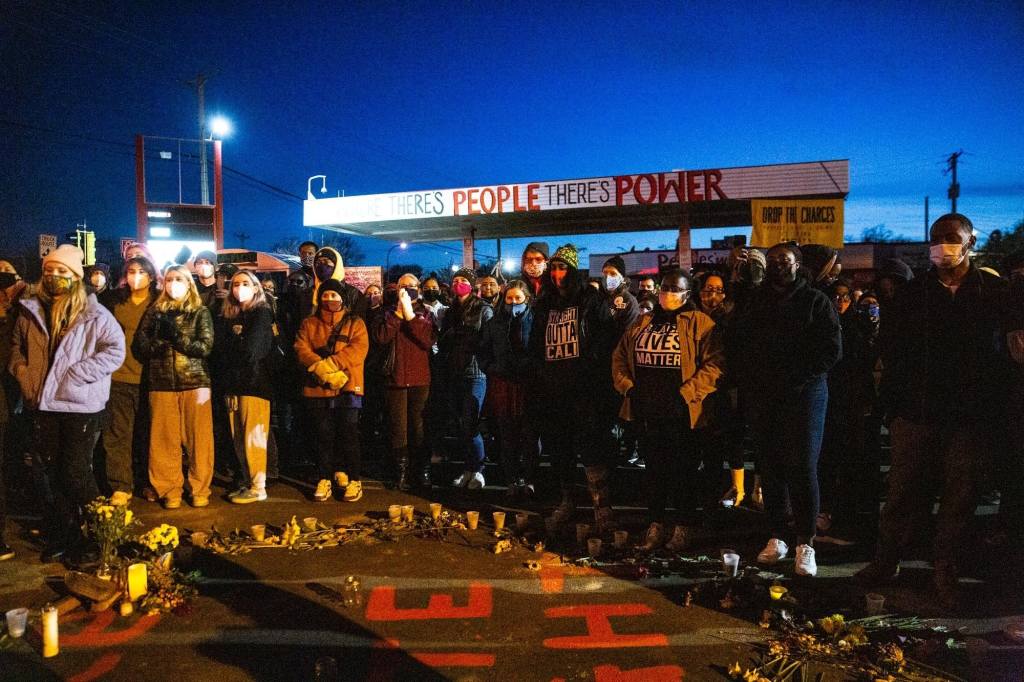 People gather to listen to speakers at George Floyd Square the evening a verdict was announced in the trial of Derek Chauvin in Minneapolis on Tuesday. Now many want the Legislature to enact new limits on police power. Evan Frost/MPR News file

It didn’t take long for racial justice advocates galvanized byDerek Chauvin’s murder conviction to swing their attention from the courthouse to the state Capitol, hoping to push ahead before momentum fades.

A coalition of groups issued a fresh demand Wednesday for lawmakers to act on police accountability measures. They hope it will repair community relationships strained by years of tense interactions and deadly police encounters.

“It’s a system. Chauvin was just an individual,” said Brian Fullman of the Barbershop and Black Congregation Cooperative. He’s also a lead organizer with Isiah, a politically engaged faith-based group.

“This felt good,” Fullman said of Chauvin’s conviction for killing George Floyd. “This is a concrete step in the right direction. But we have a whole lot of work to do when we are talking about dismantling a system.”

The sentiment is shared by Democrats who control the Minnesota House. First-term Rep. Cedrick Frazier of New Hope says the historic verdict can’t be the last word.

He spoke before the House began debating a sprawling public safety package Wednesday night. It later passed 70-63 just before 1 a.m. Thursday after a six-hour debate. The bill would not only fund the state’s prisons, crime lab and court system, but it would also set new standards for police.

No-knock warrants would be severely limited. So would the ability of police to pull over drivers solely because a tail light is out, an air freshener is dangling from the rearview mirror or the vehicle registration is out of date.

Daunte Wright, 20, was shot and killed last week by a Brooklyn Center police officer after police said he was stopped for expired license tabs. Wright’s funeral will be held Thursday.

The officer, Kim Potter, has resigned and is charged with second-degree manslaughter.

The goal of the legislation is to reduce stops for infractions that can be handled in other ways, such as by sending the person with expired license tabs a warning letter in the mail, said House Judiciary and Civil Law Committee Chair Jamie Becker-Finn, DFL-Roseville.

“These changes regarding traffic stops are already in place in different cities around the country. They are effective,” Becker-Finn said. “They actually improve overall relations with law enforcement. It’s not just about the person being pulled over. It makes the whole system work better.”

Other revisions aim to lean on mental health crisis teams instead of police in response to some 911 calls. The bill seeks to make police body camera footage more quickly available after deadly force is used. And it expands the type of complaint, discipline or misconduct information uploaded to a database to prevent problem officers from flying under the radar.

“It is sometimes easy to get caught up in the heightened emotions of a situation,” she said. “But it is our job as lawmakers to step back and consider all of the different aspects of what we’re doing to make sure we’re doing it right.”

New laws approved last summer are still sinking in. They ban chokeholds, limit instances where deadly force is justified and allow cities to extend residency incentives so more officers will live where they work.

The Republican-led Senate plans hearings later next week on an unspecified set of policing bills.

Majority Leader Paul Gazelka said the Senate will give ideas an airing but won’t rush into changes.

DFL Gov. Tim Walz says he’s willing to spend his political capital to ensure that more changes to policing are enacted. But he hasn’t said how he’ll define success or what he’s willing to give up to get the changes.

“I think most people get it that we’re not going to hit home runs here — left and right — that there has to be a real careful deliberation, conversation and relationship building,” Mariani said. “But there has to be movement.”