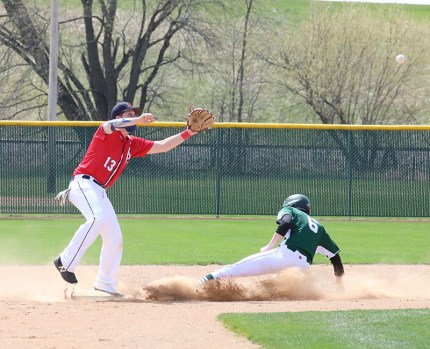 Ethan Ball prepares for the ball after a throw from the catcher Saturday against Faribault. The Tigers lost the first game of the doubleheader, but won the second game 8-3. Kelly Hendrickson/For the Albert Lea Tribune 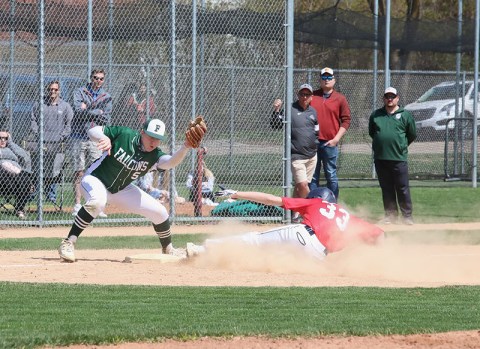 Senior Trevor Ball slides into third after taking advantage of an errant throw to the pitcher Saturday afternoon against Faribault. Kelly Hendrickson/For the Albert Lea Tribune 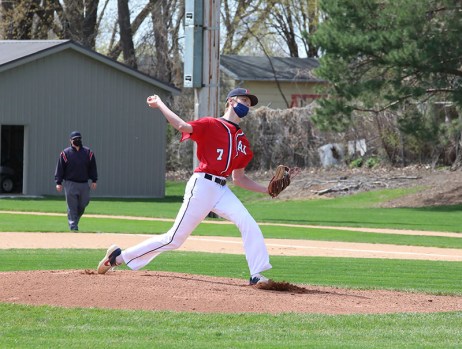 State health officials updated their guidance on mask-wearing and said players do not have to wear masks while playing outdoor sports but must wear them when not actively playing — sitting on the sideline or the baseball dugout, for instance. Kelly Hendrickson/For the Albert Lea Tribune

While the Tigers dropped their first game to the Falcons 8-4, they rallied in the late innings of the second game to even the series, winning 8-3.

Albert Lea found itself with a 4-2 lead after the fourth innings, but after a one-run fifth inning and a five-run sixth inning, Faribault took a commanding lead.

Senior Trevor Ball had a nice game at the plate, getting three hits in his three at bats, while hitting one run in and scoring one run himself. Junior Cam Davis and senior Joey Flores were the only other Tigers with multiple hits in the game. Davis had two hits in three at bats, scored one run and was walked once. Flores also had two hits, scored one run and had one RBI. Seniors Jack Jellinger, Cole Jensen and Cody Yokiel each had one hit. Jellinger also picked up an RBI.

In the second game of the day, the Tigers had a 2-1 lead heading into the fifth, but scored a combined six runs in the fifth and sixth innings to run away with the victory.

Junior Brennan Bakken and Yokiel were the only players with multiple hits in the second game. Both notching two hits, Bakken recorded two RBI and one run, while Yokiel tallied one RBI and one run. Jellinger, Ball, Jensen, Davis and junior Henry Eggum also recorded one hit each. Eggum hit in two runs, and Davis scored two runs himself.

The Tigers got an impressive performance from junior Carter Miller on the mound in game two. Miller pitched all seven innings, allowing three runs on seven hits, while striking out three and walking one.

The win marks the Tigers’ first of the season.

After going 1-1 on the day, the Tigers move to 1-3 overall this season. They will be back in action Tuesday when they host the Cougars of Mankato East.