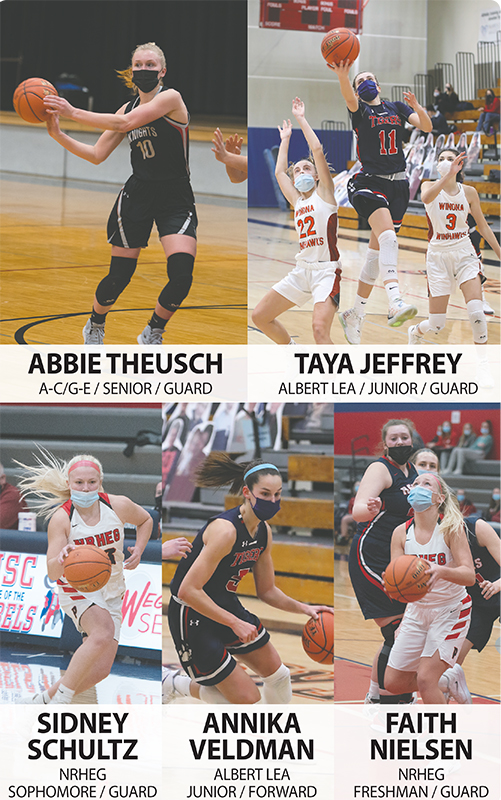 Abbie Theusch not only led her own team in numerous statistical categories, Theusch also led the area in points, rebounds and steals, and was second in assists.

Theusch led the Knights to a 5-11 record this season and will be a tough spot in the lineup to replace after etching herself as one of the best players in program history.

“Abbie really did everything for us this year,” said head coach Jenny Hovendick. “In a season with so much uncertainty, we could always count on Abbie to produce night in and night out.”

Taya Jeffrey finished with the second most points in the area as well as in the top five of the Big Nine Conference for the second consecutive season. She totaled 348 points on the season, and now sits with 1,121 points in her career, which is sixth all-time on Albert Lea’s scoring list.

Jeffrey also tallied 130 rebounds, 42 assists and 46 steals, leading the Tigers to the Section 1AAA championship and a 7-14 record.

“While Taya had offensive success, she also had the responsibility of guarding the opponent’s top player, which she also excelled at,” said head coach Jason Thompson. “She is a player that has an extremely high basketball IQ and work ethic.  She is always looking to make her teammates better.  We would not have had the success we had this season without Taya’s efforts.”

Sidney Schultz was the catalyst for the NRHEG offense this season. Schultz totaled 200 points, 84 rebounds, 82 assists and 47 steals as only a sophomore.

Schultz is a two-year captain and has been a mainstay on the varsity lineup since her seventh-grade season.

“Sidney played almost every minute for us this year,” said head coach Onika Peterson. “She is a big reason our offense works. She attacks the basket well, can step up and hit a big 3, she is a strong ball handler who sees the court well, and added a spark for us on defense.”

The Panthers finished 5-14 this season and will be on the upswing over the next few years with Schultz and others returning to the lineup.

Annika Veldman stepped in and played a major role in the Albert Lea program this season. Veldman totaled 132 pounts, 116 rebounds and 48 points as a junior, helping the Tigers take the next step as the program continues to improve.

“Annika was one of our most consistent players this past season,” Thompson said. “Her role really expanded this past season and she accepted the extra responsibilities and flourished. She has an explosive first step and proved that she can beat any defender that guarded her during the season. Her ability to get to the basket, as well as hit the outside shot, really grew her offensive confidence.”

Faith Nielsen, the youngest player to make the all-area team, led the Panthers with 205 points, while also adding 84 rebounds, 26 assists and 26 steals.

“Faith was an offensive threat for us this year,” Peterson said. “She started to get some minutes for us last year as an eighth grader but really stepped up more as a role player this year. She attacked the basket well and wasn’t afraid to shoot a big shot.”

Jacobson scored a total of 174 points, while also bringing in 111 rebounds, 17 assists and 31 steals.

Juveland tallied 146 points and 90 rebounds in her junior season.

Kenis had 158 points this season as well as a team-high 26 three pointers.

O’Rourke had 184 points and 99 rebounds as a senior for the Rebels.