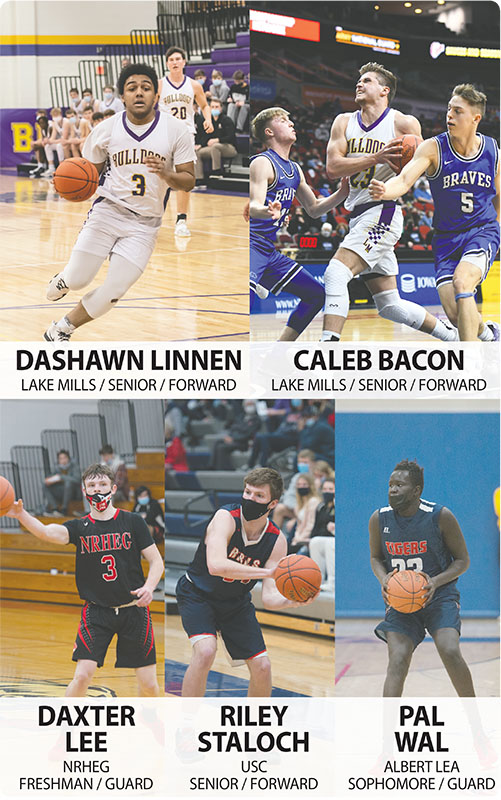 Linnen led the area in scoring  by more than 100 points with 478.  Linnen also tallied 110 rebounds, 48 assists and 34 steals while being a driving force in the Bulldog’s successful season.

Lake Mills went 25-1 this season, setting a school record for wins and going unbeaten in the regular season for the first time in school history.

“Dashawn finished his career as the most accomplished player in school history,” said head coach Kyle Menke. “He is the program’s second all-time leading scorer (1,399 points), a three-time All-Conference selection, Conference Player of the Year as a junior, and a two-time state tournament qualifier.”

Linnen will leave a big spot in the lineup to be replaced as the Bulldogs look to continue their recent success.

Bacon finished third in the area in total points, scoring 324 throughout the season. He then led the area in rebounds, assists and steals.

“Caleb’s versatility was a huge reason for our success throughout the season,” Menke said. “He is an outstanding rebounder and passer. I have never coached a player who competed with more energy and intensity than Caleb.”

Alongside Linnen, Bacon will leave a big hole in the lineup that will be tough to replace.

Lee burst onto the scene as a freshman for the Panthers in the 2020-21 season. Lee was fourth in the area in scoring with 265 points and third in points per game with 14.7.

Lee also added 112 rebounds, 48 assists and 34 steals on the season, which saw NRHEG finish with a 5-13 record overall and a 4-9 record in the conference.

According to NRHEG head coach Isaiah Lundberg, Lee led the team in scoring, rebounding, three-pointers made, three-point percentage and was also tasked with guarding the other team’s No. 1 or No. 2 scorer.

Lee is sure to be a big part of the Panther’s success in the future.

Despite having the number of games cut down due to COVID this season, Staloch still managed to finish in the top five in multiple statistical categories, including a runner up finish in points per game at 18.0.

“Riley was a tremendous player for us for three years,” said head coach Taylor Ovrebo. “One of the most consistent players I have been around and one of the best three-point shooters in school history, shooting 39% from 3 in his career.”

Wal was a bright spot in the Tigers lineup this season coming off a 2019 season in which most of the varsity lineup graduated.

Wal averaged 12 points per game, seven rebounds per game and four assists per game. He recorded four double-doubles throughout the season and  was one assist away from recording a triple-double in a game.