Trumble’s building to get new owners in June 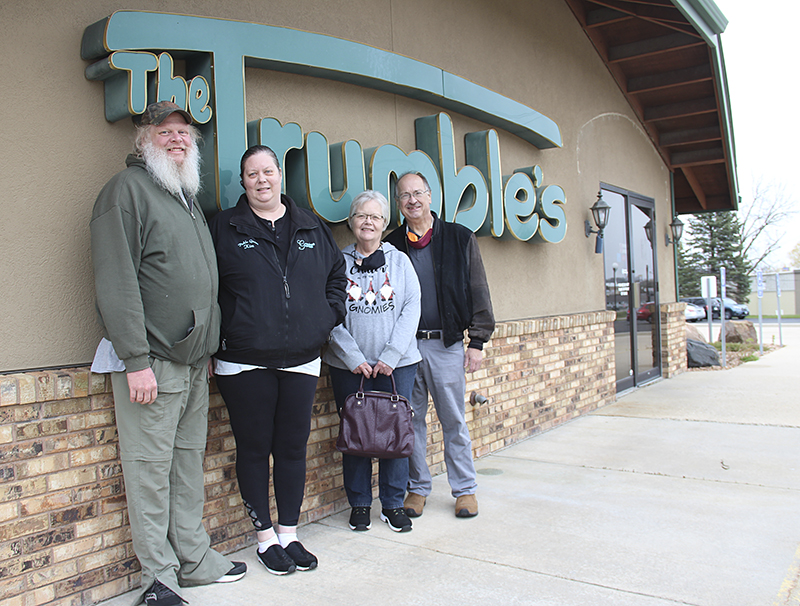 Dan and Kim Olson and Sue and Colin Minehart will close on Albert Lea's landmark The Trumble's building in June with plans to open their own restaurant in the fall. Sarah Stultz/Albert Lea Tribune

A landmark Albert Lea restaurant will soon be under new ownership.

Colin and Sue Minehart, owners of MineAgain’s in Alden, and Dan and Kim Olson, of Grandma’s Gourmets, will close in June on what has been known since 1985 as The Trumble’s Family Restaurant, at 1811 E. Main St. They hope to open the restaurant sometime in the fall after some remodeling.

Colin Minehart said their restaurant — it has not yet been determined what it will be named — will offer traditional American food with tie-ins from their steakhouse in Alden, along with many of the baked goods, including homemade pies and cakes, that Kim Olson specializes in. They might also try to tie in some old favorites from people in the community and will sell alcohol there, as well.

The restaurant will be open for three meals a day, seven days a week.

“Everybody is so supportive and wants this to work because it’s a part of Albert Lea that everybody misses,” he said.

Every time they have been out looking at the restaurant in the last few months, someone from the community stopped by wondering if the restaurant was reopening. Others have talked to them about where they used to sit in the restaurant each time they came in to eat.

The restaurant was built in 1985 by Luke and Mary Trumble and was operated as a family restaurant with their daughter, Barb O’Connor, and her husband, Pat, until the O’Connors’ retirement in November 2015 when it was purchased by another owner, he said. The restaurant closed under that ownership in February 2020.

The Mineharts and Olsons are purchasing the building out of foreclosure.

“It’s just an exciting time for all of us because we come from small operations, and it really seems kind of overwhelming but coming in with this partnership, I am so excited to be with Kim and Dan … we’re just going to knock it out. I know we are,” Colin Minehart said.

Barb O’Connor said she is pleased to hear about the new owners and can’t wait until she can eat there again.

“I’m really excited,” she said. “I’m glad somebody local is getting it — someone who has some experience who can bring it back to life. I believe the town needs it. It’s been a staple to Albert Lea.”

Kim Olson also has a background in the food and restaurant industry, working since 1984 at several restaurants, including Wimpy’s Restaurant in Faribault, Watt’s Cookin’ in Owatonna, and B&B Cafe, Applebee’s and Skol Tavern in Albert Lea.

She started Grandma’s Gourmets in 2009 first selling at farmers markets and then expanding to other events such as Thursdays on First in Rochester. She now has products sold in Hy-Vee.

She will serve as general manager of the restaurant, and they will all work in the restaurant in one way or another. They anticipate having about 30 employees and plan to incorporate local producers, such as Conger Meats and Bushel Boy, to name a few.

Sue Minehart said the reactions they have received from those who have heard about the purchase have all been positive.

“It’s actually unbelievable the support that people are looking to give us,” Colin Minehart said, “just to have another option other than fast food or pizza in the evening.”

With the opening of the new restaurant in Albert Lea, the Mineharts are looking to sell their building in Alden, and Kim Olson said it’s too soon to tell how Grandma’s Gourmets will change, depending on the success of their new endeavor. She is actively looking for someone to make her product, which has been a challenge during the pandemic.