‘We’re going to get through it’ 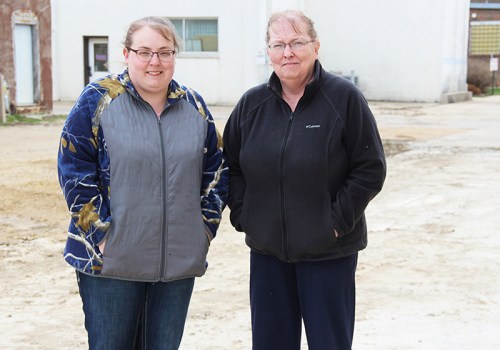 Dawn Navara, owner of Jake's Pizza in Wells, right, and her daughter, Dana Mutschler stand where the restaurant used to stand before it received structural damage at the end of February and had to be demolished. The women said they plan to rebuild at a different site. Sarah Stultz/Albert Lea Tribune 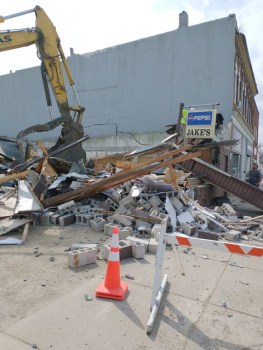 Jake's Pizza in Wells is demolished after receiving structural damage in February. Provided 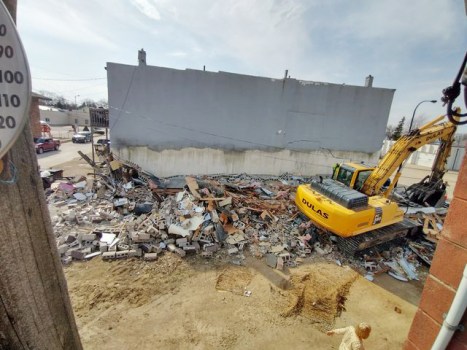 Jake's Pizza in Wells was demolished after receiving structural damage to the building. Provided

WELLS — The morning of Feb. 24, Dawn Navara, owner of Jake’s Pizza in Wells, went into the restaurant a couple hours before opening time in preparation for her monthly turkey dinner.

As she walked up toward the front of the restaurant, she noticed part of a ceiling tile come down. Then, as she walked a little closer, a light fixture fell down. She called her husband, Steve, and her daughter, Dana Mutschler, and told them they better head in to the restaurant.

The next thing she knew part of the ceiling collapsed.

“We were just thankful we were not open, because that would not have been good,” Navara said. “The people who usually sit on that front table would have been hurt.”

The family and others worked to salvage some of the fixtures through the back of the restaurant, including most of the kitchen equipment, but many of the tables and chairs in the front were not able to be saved with the collapse. The outside wall of the restaurant also ultimately caved in, she said.

An insurance field agent who came to look at the damage said the building had structural damage and that it would not be able to be saved.

Navara said two years ago they had the roof replaced and thought everything was in good working order, so they had no clue that anything like that was going to happen.

“It was very much a surprise,” she said.

Navara said Jake’s Pizza in Wells started in 1977 and had two other owners before Navara purchased it in 2009. She had worked for the former owner before purchasing it.

In addition to the pizza that Jake’s is known for, the restaurant also serves other food items, including burgers and subs, to name a few. Once a month from November to March, she offered a turkey dinner with pumpkin pie, which is what she was gearing up for the day of the collapse.

“When i bought the place I had a dream, and it worked,” she said.

The restaurant employed 10 people, including themselves, many of whom worked part time.

In the weeks since the building was damaged and closed, Navara and Mutschler said the community has pitched in to show them their support on their journey to rebuild.

Navara said the city manager has reached out with support, and Mutschler said a community member reached out to them about starting a GoFundMe campaign. Other donations have also been given in an account at CCF Bank in Wells. Through both sources, there is a combined about $25,000 that has been raised.

Navara said they have started talking with an architect about rebuilding on another site and hope to reopen there if possible by September.

“There’s still dreams,” Navara said. “Still tears yet, but we’re going to get through it. We don’t give up very easily.”

The women said they are grateful for the support they have received and they miss their customers.

If people want to contribute toward rebuilding the restaurant, funds are still being accepted through CCF Bank and through “Help Jakes Pizza of Wells Rebuild” on GoFundMe.