A fresh start for an old fav 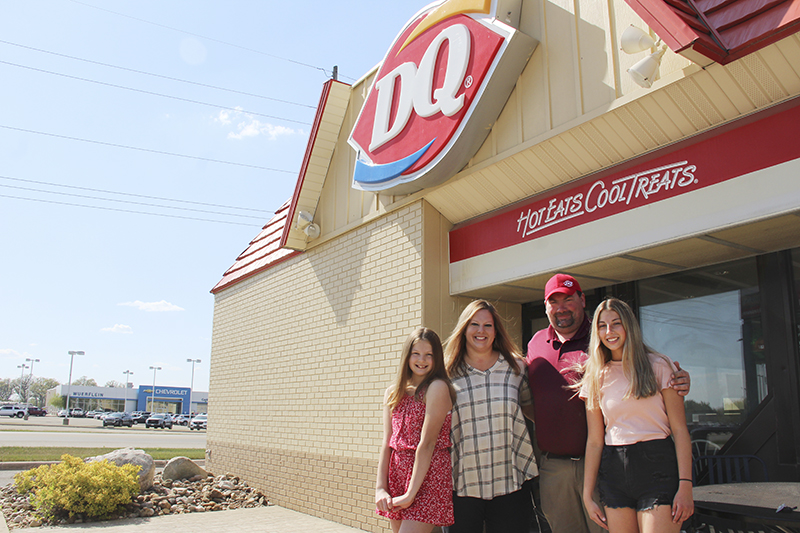 Tammy and Troy Oudekerk and their two daughters, Makenna and Katelyn, stand outside Dairy Queen on North Bridge Avenue on Tuesday. The Oudekerks purchased the only remaining Dairy Queen in Albert Lea on Aug. 31, 2020. Sarah Stultz/Albert Lea Tribune

The new owners of Albert Lea’s Dairy Queen on North Bridge Avenue said they were looking for a business opportunity when they were approached with the idea of taking over the restaurant last year.

Troy and Tammy Oudekerk, who live north of Myrtle, said Troy had been laid off from a job in the ethanol industry and was doing some farming.

They started looking into the idea of purchasing the business in February 2020, but after a delay in the process because of the COVID-19 pandemic, they ultimately took over ownership on Aug. 31, 2020.

“We didn’t want to see the DQ go away,” Troy Oudekerk said. The restaurant had formerly been owned by Fourteen Foods.

In addition to getting on their feet as new business owners without any background in the restaurant industry — going through certifications and licensing and hiring new staff — their first nine months have been eventful because of the pandemic and safety precautions that kept their lobby closed.

Now, they said, even though they are allowed to reopen the lobby, they are challenged with finding enough staff to be able to do so, while continuing to staff the drive-through.

“We have a really great crew right now — they’re great people,” Tammy Oudekerk said. “We just need more of them.”

The Oudekerks have both been working at the restaurant full time and are trying to recruit more help to build their team. They have eight employees right now and are looking to hire another seven.

They said they appreciate the patronage and patience they have received from the community and hope for continued patience in the future. They noted they try to cook everything fresh and made to order.

Tammy Oudekerk said their restaurant is not a corporate store, but rather a territorial one, so there might be some slight modifications to some of the menu items from what is advertised on television commercials. Otherwise, the restaurant offers the full menu of both ice cream and grilled options.

Aside from their business, the Oudekerks have two daughters, Makenna, 11, and Katelyn, 16.

They said they hope to stay involved in the community and youth sports and also hope to start promoting the company’s Dilly Bars for graduations.

Down the road, they have improvements they want to make to the inside of the restaurant, but for now the top priority is hiring more staff.

They are looking forward to the opening of the new MercyOne clinic at the mall, which they said they hope will bring more traffic to the restaurant, as well as the completion of the Bridge Avenue reconstruction.

The restaurant is at 2530 Bridge Ave.