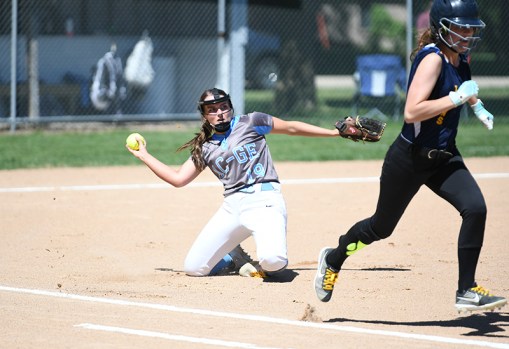 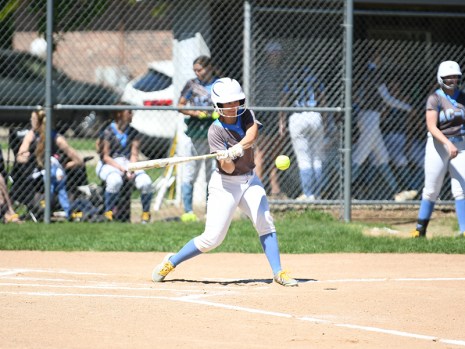 Liz Wasmoen takes a cut at the ball Wednesday afternoon at home against Schaeffer Academy. Wasmoen was 2-2 at the plate with two RBI. Tyler Julson/Albert Lea Tribune 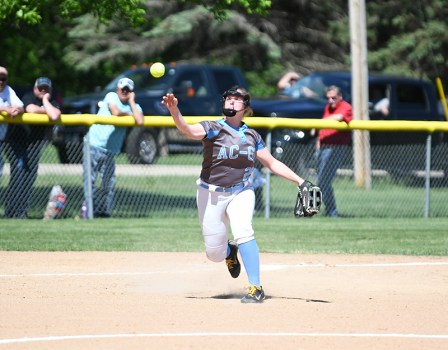 Kayla Schmidt makes the toss to first base Wednesday in the Lace Up for Pediatric Cancer game against Schaeffer Academy. Tyler Julson/Albert Lea Tribune

In what would turn out to be its final game of the regular season, the Alden-Conger/Glenville-Emmons softball team hosted Schaeffer Academy Wednesday night in the “Lace up for Pediatric Cancer game.”

The Wolverines wasted no time proving they came out to play jumping out to an 8-1 lead in the first inning, eventually coming away with a 21-1 victory.

While the Wolverines recorded 11 total hits, many of them were spread out between the players. Liz Wasmoen was the lone player to record multiple hits in the game. Mallory Ignaszewski, Lauren Heskett, Hailey Schmidt, Justine Nelson, Sami Armstrong, Kaetlin Bendickson, Abbie Theusch, Kylie Korman and Kayla Schmidt each tallied one hit.

Hailey Schmidt led the team in RBIs with three. Gracie Dahlum, Wasmoen, Bendickson and Kayla Schmidt each had two, while Heskett, Nelson, Theusch and Peterson each had one.

It was both an offensive and defensive showcase for the Wolverines, who only allowed one run.

Bendickson started in the circle and pitched all four innings for Alden-Conger/Glenville-Emmons. She allowed just one run on three hits, while recording four walks and two strikeouts.

The Wolverines end the regular season with a record of 12-7, and winners of their last three consecutive games.

The first games of the Section 1A tournament are scheduled to begins Tuesday afternoon. As the standings sit now, the Wolverines are the No. 2 seed in the Section 1A West division.

That position would earn them a home matchup against the No. 7 seed, which as of press time would be Lyle-Pacelli.

In their two previous meetings this season Alden-Conger/Glenville-Emmons came out as the winner in both of those games by a combined score of 25-12.