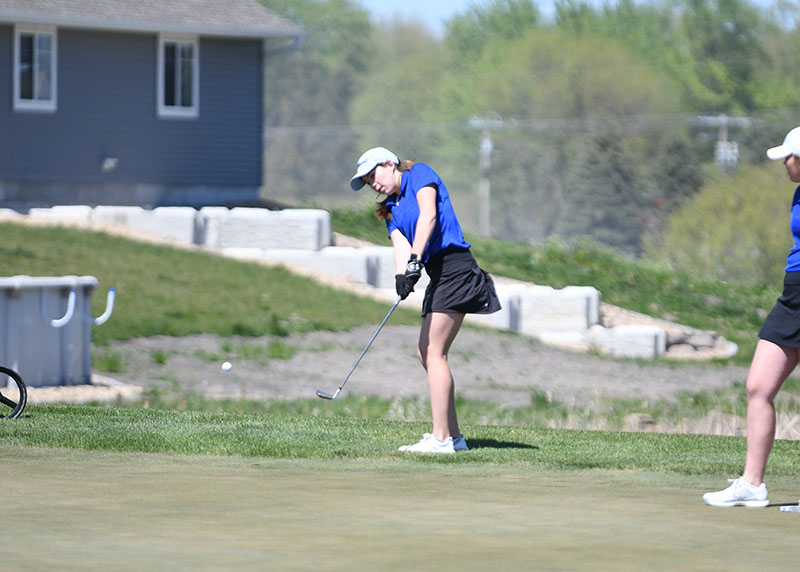 Alyssa Jensen hits a short chip from off the green on hole No. 1 Tuesday at Wedgewood Cove Golf Course. Jensen was the top scorer for the Tigers, shooting a 95. Tyler Julson/Albert Lea Tribune

While the Tigers made easy work of the Falcons, who finished with a score of 474, they came up just short of beating the Winhawks 372-389.

The top finisher for Albert Lea was Alyssa Jensen, finishing with a final score of 95. Whitney Mullenbach was close behind with a score of 96. Jessica Vogt and Ashlyn Berven also contributed to Albert Lea’s team score, with Vogt shooting a 98 and Berven scoring a 100. Also golfing for the Tigers but missing out on the team score, were Gracie Palmer and Addison Herr. Palmer carded a final score of 109, and Herr finished with a 111.

“This was a nice improvement for us as a team,” said head coach Shawn Riebe. “Some of our girls posted low numbers for their season. We are still showing our youth and inexperience in golf meets. We are a very young team which bodes well for the future. I think when the girls learn to control the mental side of the game better, our scores will reflect that quickly.”

The Tigers get right back to action Thursday afternoon when they travel to Northfield to take on the Raiders as well as Owatonna and Rochester Mayo. It is one of two remaining meets before the second and final Big Nine Conference tournaments this season.