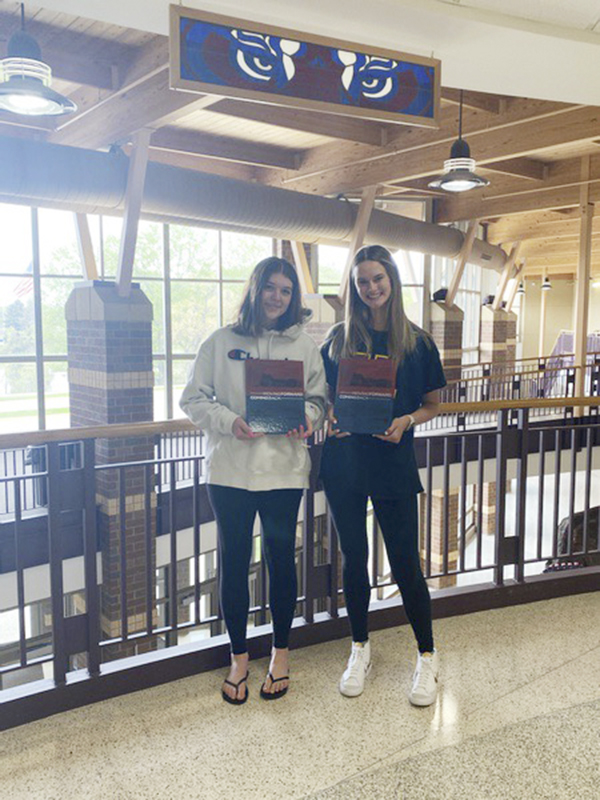 Albert Lea High School seniors Shelby Hanson and Grace Nelson are co-editors of the ’20-’21 Tiger Yearbook. They created and designed the theme of this year’s book, Moving Forward/Coming Back, to focus on the history of ALHS (to include the 20th Anniversary of 2000 Tiger Lane) and coming out of quarantine to attend school during a pandemic. Provided

The National Yearbook Program of Excellence recognizes engaging yearbooks that reflect a broad representation of the student body while helping students develop 21st century skills such as communication, collaboration and information and communication technologies (ICT) literacy, according to a news release.

The Tiger award-winning yearbook program is led by Shelby Hanson and Grace Nelson under the direction of Angie Zoller Barker, Tiger yearbook adviser.

Jostens’ National Yearbook Program of Excellence Awards are presented twice a year, in spring and in fall based on the yearbook’s arrival date at the school. The award was presented to the Albert Lea High School yearbook program for achieving defined criteria in between one and three of the following categories: creating an inclusive yearbook, generating school engagement and successfully managing the yearbook creation process.

“Jostens is proud to recognize those individuals who have created an exceptional yearbook for their school and community,” said Tammy Whitaker, Jostens vice president and chief operating officer of the yearbook division. “These schools did an exceptional job on multiple levels, despite the challenges presented by this school year. Yearbooks are a critical part of capturing and telling a school’s story, and Jostens is dedicated to supporting yearbook staff members as they do their important work.”

Founded in 1897, Jostens has produced school yearbooks for over 60 years.

Yearbooks can be purchased at Albert Lea High School in the office from 8 a.m. to 3:30 p.m. Monday through Thursday. Supplies are limited.