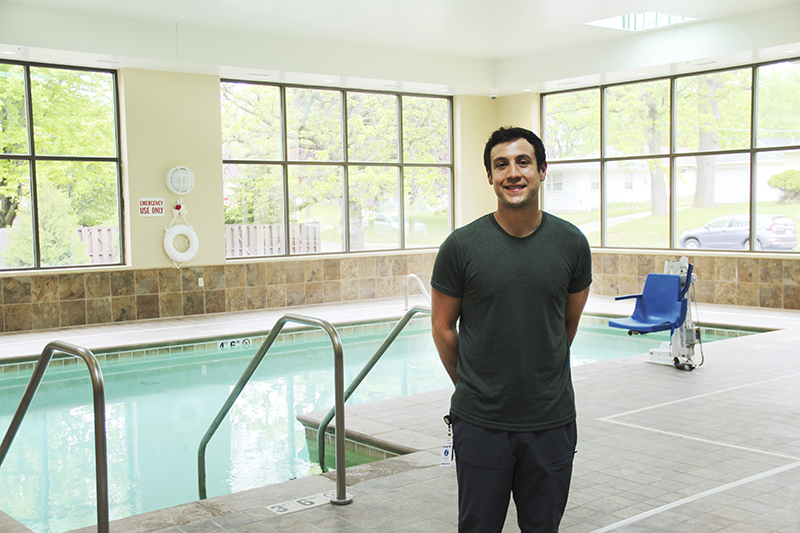 After moving away from Albert Lea to attend college and start his career, an Albert Lea native is making a name for himself back in the community he grew up in as the new wellness director at Thorne Crest Senior Living Community.

Jordan Montes is a few weeks into the position at Thorne Crest, after previously working for a physical therapy clinic ExercisAbilities in Rochester for over seven years. There he worked as an exercise physiologist, working with patients who had Parkinson’s, spinal cord injuries or strokes, to name a few conditions.

He graduated in 2016 with a bachelor’s degree in exercise and rehabilitative science from Winona State University.

Montes said he moved back to Albert Lea four years ago but had been commuting to Rochester for his previous job. The commute was getting to be too much, so he started looking for something closer to home so he could have more time for his family — his wife, Amanda, and their three children, 14, 5 and 11 months.

In his new role as wellness director at Thorne Crest, he helps not only with wellness for the residents but also wellness for the staff. He said he will conduct both group and one-on-one classes and right now helps around 50 clients. One of the highlights at Thorne Crest is the pool, where he hoped soon it would be open again to classes after a break for the COVID-19 pandemic.

“Everyone is so welcoming,” he said. “The residents are awesome and open-minded. They’re letting me be flexible and implement my own ideas.”

In addition to his work with the residents and staff at Thorne Crest, Montes said he would like to implement more group classes in the future where people from the community can also attend.

“I really want to get the community involved,” he said.

Outside of work, Montes said he enjoys spending time with family and friends and is an avid biker and enjoys playing basketball, hiking and camping.

His wife is also originally from Albert Lea, and both of their families are in the surrounding area.