Dwaine Manville Abbe, age 90, was born November 26, 1930 to Walter and Melita (Jahnke) Abbe in Freeborn County near Alden, Minnesota. He passed away on May 7, 2021, at St. John’s on Fountain Lake of bladder cancer. The family will hold a Celebration of Life at Bayview Freeborn Funeral Home in early June. Burial will be at Graceland Cemetery. 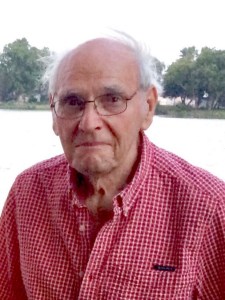 He was raised on a farm and attended school in Alden, graduating in 1949. He worked as a carpenter for Ed Jacobs and George Neve. He married Mavis Wermedal at Scarville Synod Lutheran Church in Scarville, IA on September 14, 1952 after they met at a wedding. They built their home in Alden in 1954, and continued to live in their home until 2017 when they relocated to Water’s Edge, a St. John’s independent living community in Albert Lea. Dwaine was a member of the First Lutheran Church in Albert Lea, Carpenters Local 766, HRRVC (Holiday Rambler RV International) Camping Club, member of the Alden Snow Gems snowmobile club, and past member of the Elks Lodge.

Dwaine began working at Streater LLC in Albert Lea in 1961, and retired in 1995 having worked in the Wood Shop, as Installation Supervisor for 24 years, and in the Maintenance department. His family joined him in his travels, and throughout his life and career, he visited all 50 states, Europe, Canada, the Caribbean, and Mexico – and these are some of his fondest memories, with home being his most favorite place.

He and his family enjoyed music, and he loved attending all of their programs, concerts and sporting activities. He was a great “fix-it” man and enjoyed helping wherever there was a need. Hunting and fishing were his early passions that turned into boating, camping, snowmobiling, biking and walking with family and friends. He and Mavis spent winters for 16 years in Pharr, Texas and 6 years in Surprise, Arizona. While in Texas, he volunteered at the McAllen Medical Center. He enjoyed board games, and hand-crafted a few hundred sets of Pegs and Jokers for other people.

Dwaine survived two heart attacks – one in December 2000, and another heart rupture in June 2017. The latter was written up in the Mayo Clinic Proceedings medical journal as a case study.

A loving husband and family man, he will be greatly missed. Memorials may be directed to Albert Lea Hospice or Peace and Power.