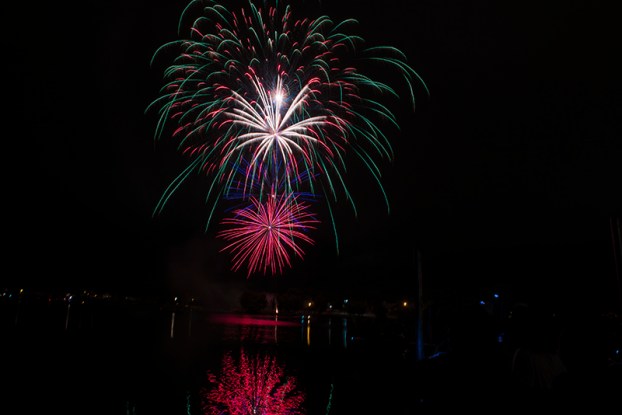 The Fourth of July fireworks are a popular event each summer in Albert Lea. Colleen Harrison/Albert Lea Tribune

Albert Lea residents will celebrate Independence Day with fireworks as in years past, after approval of a fireworks vendor by the Albert Lea City Council Monday night.

The council approved a pyrotechnic display for the Fourth of July through Curtis Serbus of Zimmerman during the regular council item for licenses and permits.

Shari Jenson, executive director of the Albert Lea-Freeborn County Chamber of Commerce, said with the approval, the chamber will move forward with the annual fireworks fundraiser at the corner of Broadway and Main Street on June 4 hosted by the Chamber Ambassadors and KATE Radio.

“The Chamber could not be more thrilled to see restrictions loosening and our big summer events getting approved,” Jenson said. “We’re excited for the positive impact these events will have on our local businesses and the community as a whole.”

In addition to the fireworks, the chamber is also hosting the annual Third of July Parade with the theme this year of “Happier Days Ahead,” with “Happy Days” actress Marion Ross as the grand marshal.

Ross will also be in town for the unveiling of a statue of her as Mrs. Cunningham on July 2 at the corner of Broadway and Marion Ross Street.

• Authorized an agreement with the city of Manchester for enforcement of certain ordinances by the Albert Lea Police Department.

City Manager Ian Rigg said the agreement is similar to what was done in Hartland a few years ago. It will not interfere with Albert Lea officers’ normal operations, but will be voluntarily accepted overtime that will be reimbursed by the city of Manchester.

• Adopted a newly completed rental housing needs analysis conducted by Mayfield Research & Consulting regarding the city’s rental housing stock, conditions and affordability. Rigg said in summary the report identified shortages of both market rate and subsidized rental units even with the addition of the new apartments going in at Blazing Star Landing and the former Marketplace Foods site.

Rigg said the housing study will be helpful to reference when trying to bring in more housing developments.

Look for a more detailed story about the housing needs analysis in a future issue of the Tribune.

• Approved the application for a State Capital Projects Grants-in-Aid grant to help pay a portion of the facade restoration needed at the Jacobson Apartments building at 211 S. Broadway, including terra cotta tiles and eroded mortar joints.

Rigg estimated it would take at least 90 days for the application to be reviewed.

• Executed an agreement with the Minnesota Department of Transportation regarding a $13,000 federal Coronavirus Response and Relief Supplemental Appropriations grant for the city’s airport.

• Amended the conditional use permit for the apartments going in at 1619 W. Main St., the former Marketplace Foods building, to include a site plan map.

• Authorized the sale of a 1994 Pontiac Firebird and a 2007 Chrysler 300 and their contents. Both were unclaimed city property. The cars will be sold via a public sale.

2 taken to hospital in separate crashes

One person was taken to the hospital by ambulance Friday evening after a rear-end collision on Hammer Road.  According to... read more