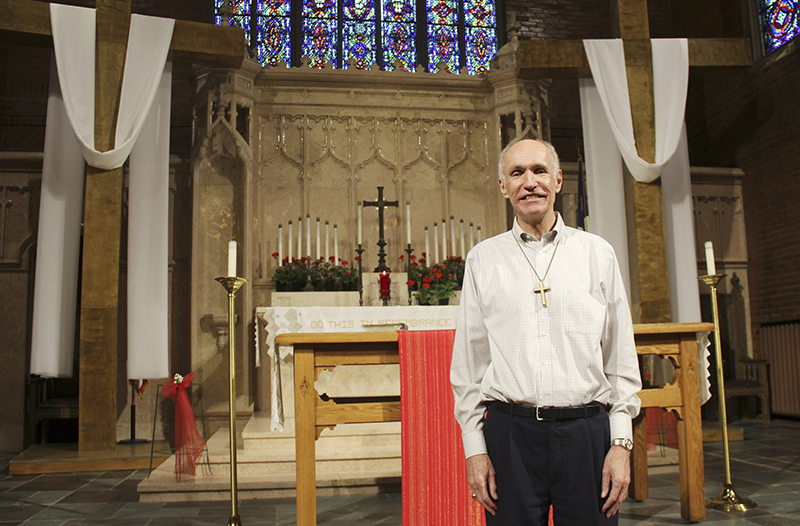 After more than 18 years as lead pastor at First Lutheran Church, John Holt's last Sunday will be Sunday. Holt said he and his wife plan to stay in Albert Lea afer his retirement. Sarah Stultz/Albert Lea Tribune

A longtime Albert Lea faith leader is retiring on Sunday after giving his final sermon at First Lutheran Church.

The Rev. John Holt started with the church in September 2002, and before that he served at Our Savior’s Evangelical Lutheran Church in Jackson for over 14 years and at a church in Dwight, North Dakota, for over seven years.

“It’s going to be a big change not being here — with the people I love and cherish, and who care about me, too,” Holt said in an interview Thursday at the church.

Holt, 70, said he was called to the ministry after working as a certified public accountant at a firm now known as KPMG in Minneapolis. He was a churchgoer, but at one point said he was converted to “really trust in Christ.”

“He made a difference in my life,” he said.

Holt had lunch with his cousin one day about what to do next and ultimately decided to leave the world of accounting and attend Luther Seminary in St. Paul. That was the beginning of his pastoral work.

Looking back at his more than 18 years at First Lutheran, he said he will always remember the week-to-week worship with people, with music and singing, and simply going through life with people. He noted he has conducted almost 500 funerals and burials, as the membership, like the community, ages.

He will also always remember his daughter’s wedding at the church and how he got to walk her down the aisle and then put on his ministerial robe and lead the wedding. At the end, he was able to walk out with his wife.

He is also proud to have been a part of the weekly television broadcast “Peace and Power” that has viewers not only in Albert Lea and Minnesota but in Iowa and Wisconsin, as well. He said the broadcast became even more important during the COVID-19 pandemic when churches were closed.

“People could turn on the TV, and there we were,” Holt said.

Holt also recalled working on a project with church member and artist Eunice Isackson to bring in new stained glass windows to a building addition from the 1990s. The windows revolve around the “I Am” statements from the Bible.

While there were many good memories, Holt said there was heartache, too.

“You don’t forget the children who have been buried,” he said, but also noted the miracles he has witnessed, as well.

He remembered one congregant in his 80s who was in hospice and was nearing his final days. He and others prayed and asked Christ to give the man more time on Earth until he reached 90. The man rallied and recovered and went on to live until he was 90. Holt said while everyone will at some point die, the key is being ready for death and accepting Jesus Christ into their lives.

He said one of his goals over the years with First Lutheran has been to bring stability to the congregation, which he estimated has about 1,000 people who regularly participate. He is also proud to see more growth in the church’s lay leadership.

He thanked the church members and the people in the community for letting him serve in the capacity. He said he has loved the people of Albert Lea and the community spirit here. Though Albert Lea has its problems like any other place, he said, the congregation has always been positive and ready to move forward.

“Keep a positive attitude and trust in God,” he said. “Our hope for the world is in Jesus Christ — that’s it.”

Roger Fears will come to the church June 14 to serve as associate pastor, and Jan Crissinger will serve as interim lead pastor until a new lead pastor is called.

Holt said he and his wife, Joan, plan to stay in Albert Lea, though they will separate themselves from the church.

He said he has house projects he expects to work on, and they also have some weeks planned with their newest grandsons.

The Holts have four children — three in the Twin Cities area and one in Wisconsin — and five grandchildren.