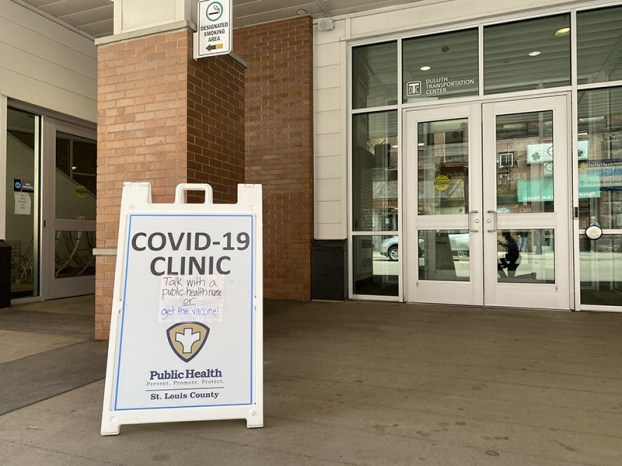 A sign advertises free, walk-up COVID-19 vaccines at the transportation center in Duluth earlier this month, part of a growing effort to break down barriers for people who want to get the vaccine. Dan Kraker/MPR News file

Tuesday’s COVID-19 data offers more evidence the pandemic is in retreat. That includes just 256 newly reported cases, the lowest daily count since August. The number of known, active cases fell to its lowest point since September.

Another positive sign: The seven-day vaccination trend appears to be stabilizing at around 40,000 shots a day after weeks of free-fall.

The hopeful trends come as the state prepares to end all remaining statewide COVID-19 curbs on Friday in time for the Memorial Day weekend.

After an anxious April, it appears Minnesota’s spring surge is over.

The count of known, active COVID-19 cases is down to 5,128— its lowest point since mid-September and down nearly 75 percent from its most recent high of around 20,000 in mid-April.

There were 368 people hospitalized with COVID-19 in Minnesota; 96 needed intensive care. Both figures continue to trend down from their April peaks. The count of intensive care patients is down below 100 for the first time since late March.

New hospital admissions have dropped significantly and are trending at around two-month lows.

Eleven newly reported deaths put Minnesota’s pandemic toll at 7,381. Among those who have died, about 60 percent had been living in long-term care or assisted-living facilities; most had underlying health problems.

The state has recorded 599,477 total confirmed or probable cases so far in the pandemic, including the 256 posted Tuesday — the 11th consecutive day of fewer than 1,000 new cases and the first time since early September the state saw three consecutive days below 500.

People in their 20s still make up the age bracket with the state’s largest number of confirmed cases — about 111,000 since the pandemic began. The number of high school-age youth confirmed with the disease has also grown, with more than 49,000 15-to-19-year-olds known to be infected during the pandemic.

About 2.8 million residents 16 and older now have at least one vaccine dose; about 2.5 million have completed their vaccinations as of Tuesday’s update.

That works out to about 57 percent of the 16-and-older population completely vaccinated and 63.6 percent with at least one shot, including 89 percent of those 65 and older.

Minnesota’s also seeing notable growth in the number of children ages 12 to 15 getting vaccinated in the two weeks since federal authorities approved the Pfizer vaccine for use at those ages.

Health Department data shows more than 60,000 Minnesota 12-to-15-year-olds with at least one dose. Tuesday was the first time that data was precisely reported. That’s roughly 20 percent of that population already with at least one shot.

The new case was a person in their 30s.

The county has had 3,445 total cases since the start of the pandemic.

According to the Minnesota Department of Health,  as of Sunday 13,648 people in Freeborn County had received at least one COVID-19 vaccine dose and 12,463 had received the completed series.

SANDSTONE — The Wildcat Sanctuary in Minnesota has accepted some big cats seized by federal officials from the private zoo... read more