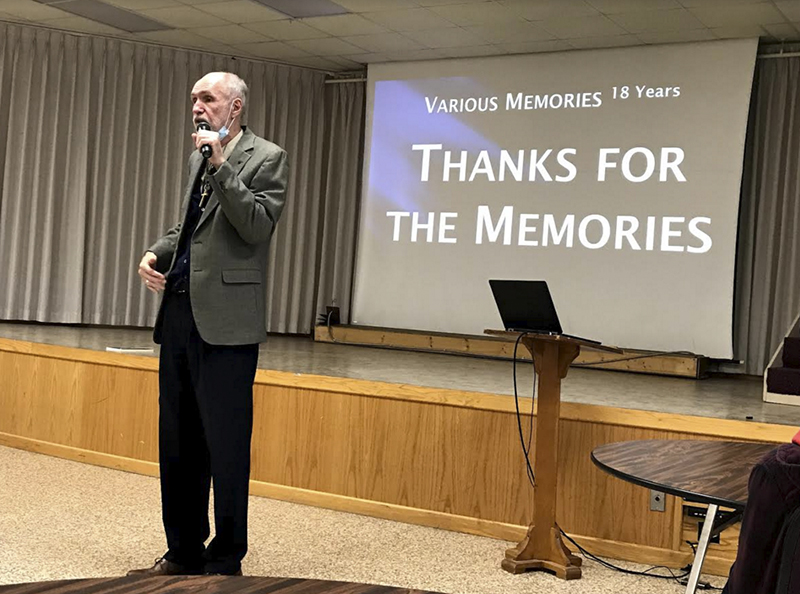 First Lutheran Church Women met at 1:15 p.m. April 14 in Bethany Hall. Co-President Sheri Nicol welcomed members and guests. Cindy Gandrud read a devotion from “Random Acts of Kindness” that spoke on not just doing what is required in life but to move toward the spiritual necessity of acting out our love through our joy of giving. Sheri then led the group in reading the FLCW purpose.

The Rev. John and Joan Holt provided the special music, singing “Side By Side” and “Bond of Love” celebrating their 47 years of marriage.

Diane Damerow, co-president, introduced the program speaker, John Holt, who spoke on “Memories of First Lutheran Church.” He will be retiring on May 23 after serving as lead pastor of First Lutheran for 18 years. He took us through a memory trip, touching on highlights and remembrances. He gave appreciation for the interim ministers who have helped out over the years and all the various staff members that he has worked with. He shared some of the statistics of his ministry and gave his thanks to various people, groups and events in the church and the community that have been meaningful to him. Damerow  presented him with a retirement gift from FLCW.

Circle roll call was taken with Circle 12 winning with 77% of its members in attendance.

1) The secretary’s minutes from the March 10 meeting were approved as printed by a motion from Bonnie Schneider and second by Carol Olson. Motion carried.

3) Corresponding Secretary, Bonnie Trampel, received a letter from Bibles for the World, announcing a sermon message being made available through them.

Old business: An ad hoc committee is being formed to discuss the direction of FLCW going forward.

1) The May Tea is canceled. Jordan Winter will be the guest speaker for the May 12 meeting speaking on “Communication and Technology at First Lutheran.”

2) The June salad luncheon is canceled.

3) Anyone with an idea for a July field trip should contact one of the FLCW officers.

Following the business meeting, the hymn “What a Fellowship, What a Joy Divine, Leaning on the Everlasting Arms” was sung, while the offering was received. The offering prayer was given by Gandrud. Dawn Rozinka received the door prize.

Thank yous were given to usher and greeter Trampel and to hostess chairperson Gen Montei and her committee of Deloris Goskeson, Neva Mathison, Carol Olson and Rozinka.

Caring and Sharing reported there were two funerals in March.

The meeting closed with the Lord’s Prayer.