Ruth Coffman, age 96 of Northfield, passed away surrounded by the love of her family at the home of her son Dick, on Saturday afternoon, May 1, 2021. 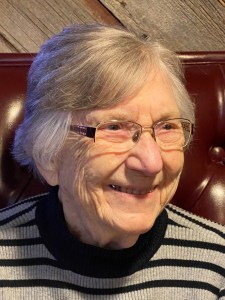 Ruth Elizabeth Steele Coffman was born May 27, 1924, on the family farm at Albert Lea, Minnesota, to Frank and Erma (Pfeiffer) Steele. She was baptized and confirmed at Pickerel Lutheran Church in rural Albert Lea where her grandfather was the pastor. She attended Conger School and graduated from Albert Lea High School in 1943. On August 11, 1946, Ruth was united in marriage to Donald Coffman at Pickerel Lake Lutheran. After marriage, they made their home in Albert Lea until 1951, when they moved to Minneapolis. In 1958, they moved to Rochester and Ruth returned to the work force as a secretary/book keeper. In 1974, they moved to Boca Raton, Florida, and Ruth began her career in real estate – a job she truly loved and had great success at. In 1990, Ruth and Don decided to move to Northfield.

Shortly after, Ruth joined Al Thorpe Realty where she successfully continued her career and quickly earned the title, “Queen of Condos.” She went on to join her son with Coffman Realty. She stayed active with the business until retiring at the age of 89. Even in retirement she continued to help the business as office manager.

Ruth was a member of Trinity Lutheran Church and was an active member of the Northfield’s National Day of Prayer Breakfast organizing committee for many years. She was always very active in the business and civic groups in the communities in which she lived. She enjoyed Bridge Club and cherished the friendships she developed throughout her career in real estate.

In lieu of flowers, memorials are preferred to the Ruth Coffman Memorial Fund.

Arrangements are with the Bierman Funeral Home. www.biermanfuneralhome.com