Thomas Arlo Thompson, age 75, of Albert Lea, passed away Sunday, May 9th at Mayo Clinic Methodist Campus in Rochester. Tom died in part from a fall from a high ladder and terminal leukemia. 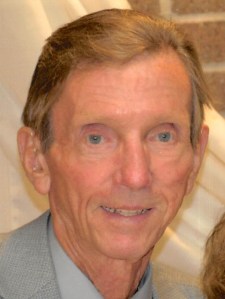 Tom was born to Lillian and Clarence Thompson in Albert Lea on August 16, 1945. Tom served in the US Navy for 24 ½ years as a senior chief of the flight deck. Tom also made a career of over the road trucking later in life.

Tom was active in the Honor Guard, AA Club, fishing and loved to watch the world news. He had a great sense of humor and could often be heard singing to his wife Lorelei. He was a fan of Frank Sinatra and he loved playing cards with his granddaughter, Ellen, when she was a little girl. Some of Tom’s favorite past times were planting flowers, mowing the grass, and creating a rock garden with a beautiful waterfall.

Tom was a kind and gentle soul, a friend to many, and a good listener. He had a special sparkle to his blue eyes with a little mischief. Tom’s absolute favorite treat was a homemade oatmeal cookie.

Thomas and Lorelei (Matson) were united in marriage on November 26, 2011.

Tom was preceded in death by his parents; numerous siblings; and great-grandson, Grant.

A memorial service will be held at 11:00 a.m. on Monday, May 17, 2021 at Bonnerup Funeral Service with Pastor Don Malinsky officiating. Interment will follow at Hillcrest Cemetery with military honors provided by the Albert Lea area Veterans.