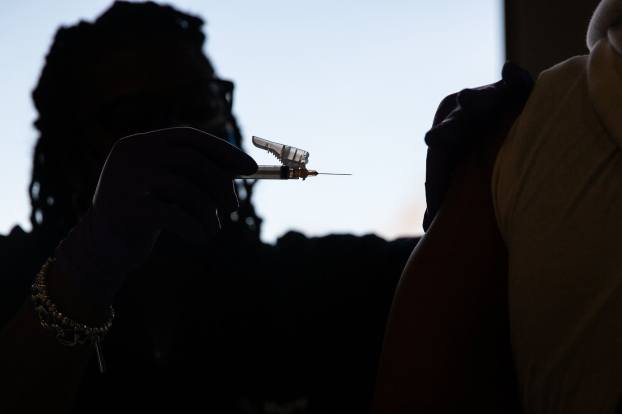 A COVID-19 vaccine is put into a patient's arm at a clinic in St. Paul in the middle of March. Evan Frost/MPR News

Vaccination pace back above 40,000 shots a day

Minnesota’s COVID-19 vaccination pace climbed back above 40,000 shots a day over the weekend, a level not previously seen for more than two weeks.

That’s still far from the peak seen in mid-April, when the seven-day rolling average exceeded 60,000 doses a day. But it’s a notable increase from earlier this month, when that average had dropped below 34,000.

And it’s welcome news as the state works to break out of what had been several weeks of sluggish vaccination numbers.

The recent increase in the vaccination pace is being driven by a big rise in reported first vaccine doses — now averaging nearly 18,000 a day, up from about 10,000 a day a week ago.

Backlogged data reported in recent days accounts for some, but not all of that rise. What’s also likely playing a role is 12- to 15-year-olds in the state getting their first vaccine shots after being approved to receive the vaccine.

Despite concerns around the vaccination rate, the overall pandemic picture remains solid.

The count of known, active COVID-19 cases dropped below 7,000 on Saturday for the first time in more than two months, and fell further on Sunday. Active cases have fallen by nearly half over the past two weeks and are down nearly two-thirds from their most recent high of around 20,000 in mid-April.

As of Friday there were 396 people hospitalized with COVID-19 in Minnesota; 116 needed intensive care. Both figures continue to trend down from their April peaks. New hospital admissions have dropped significantly and are trending at six-week lows.

Seven newly reported deaths Sunday brought Minnesota’s pandemic toll to 7,370. Among those who have died, about 60 percent had been living in long-term care or assisted-living facilities; most had underlying health problems.

The state has recorded 598,766 total confirmed or probable cases so far in the pandemic, including the 443 posted Sunday — the ninth consecutive day of fewer than 1,000 new cases. About 98 percent of Minnesotans known to be infected with COVID-19 in the pandemic have recovered to the point where they no longer need to isolate.

Officials continue to implore Minnesotans to keep their guard up during proms, graduations and other spring events, noting that more contagious COVID-19 variants are driving new cases across the state.

People in their 20s still make up the age bracket with the state’s largest number of confirmed cases — more than 110,000 since the pandemic began. The number of high school-age youth confirmed with the disease has also grown, with more than 49,000 15-to-19-year-olds known to be infected during the pandemic.

Nearly 2.8 million residents 16 and older now have at least one vaccine dose; nearly 2.5 million have completed their vaccinations as of Sunday’s update.

That works out to about 56.5 percent of the 16-and-older population completely vaccinated and 63.3 percent with at least one shot, including 89 percent of those 65 and older.

Officials are not yet reporting vaccinations among newly eligible 12-to-15-year-olds, but as of Sunday they had reported nearly 55,000 new vaccinations of people with “unknown” age.

Most of these are probably 12-to-15-year-olds who aren’t yet being properly reported by the Health Department’s computer systems.

By the Associated Press and Minnesota Public Radio News Members of George Floyd’s family, and others who lost loved ones... read more