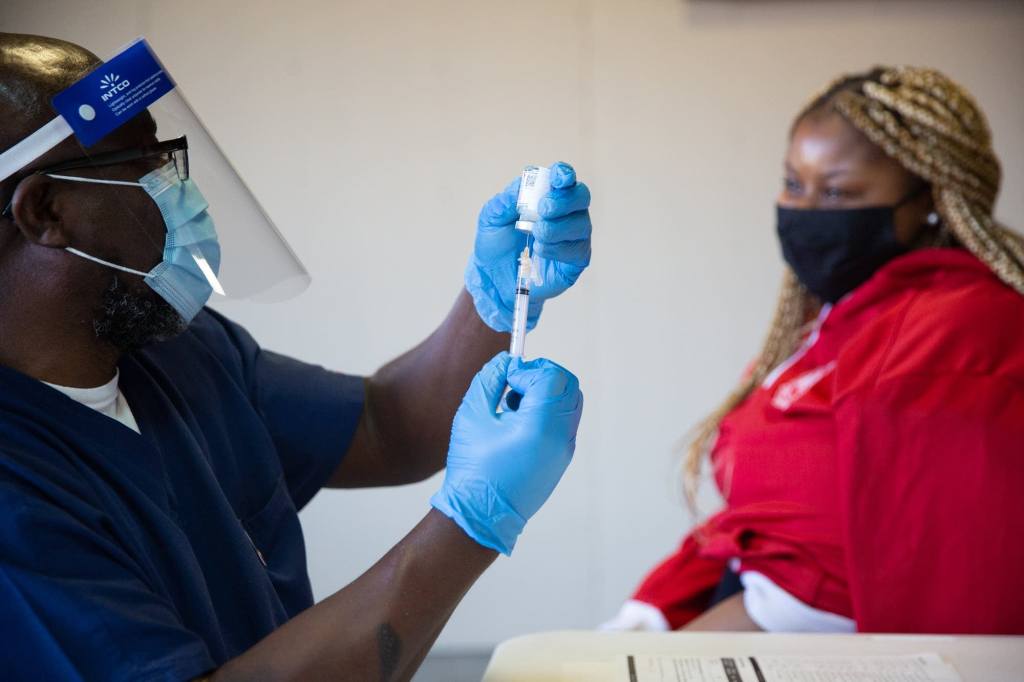 Nurse Sam Kissi, left, draws a dose of COVID-19 vaccine into a syringe before administering it to Zarea Fonge at a vaccine clinic put on by Black Nurses Rock and Ramsey County at Shiloh Missionary Baptist Church in St. Paul on March 28. Evan Frost/MPR News file

Minnesota has inched above the milestone of 60 percent of state residents 16 and older with at least one dose of a COVID-19 vaccine.

Next up: the 70-percent mark that Gov. Tim Walz has linked to the end of remaining statewide mask mandates. Walz said last week that he’ll drop those face covering rules on July 1 — or sooner, if the state reaches 70 percent of adults vaccinated.

But standing in the way is a rapidly dropping vaccination pace.

Averaged over the past week, as of Sunday’s update, the state is reporting fewer than 34,000 vaccinations a day — the lowest level in more than two months, and down from more than 60,000 a day in mid-April.

A few weeks ago, the state was on pace to hit the 70 percent vaccination mark in mid-May; now it’s pushed back to at least mid-June, if the current rate holds.

Most of the vaccinations in recent days have been second doses. The state is averaging fewer than 11,000 first-dose shots a day as of Sunday — the lowest level since Feb. 26.

And it’s not for lack of supply: Walz said last week that the federal government stands ready to ship more vaccine doses to Minnesota, if there’s demand.

Health officials have said they’re stepping up outreach efforts. And as he announced scaled-back pandemic restrictions last week Walz pretty much begged still-unvaccinated Minnesota adults to step up — even urging those who oppose him politically to get the shots so they could be healthy enough to vote against him next year.

On Friday, Walz announced that eligible Minnesotans can now walk in for a COVID-19 vaccination without an appointment at the state’s community vaccination program locations.

More than 2.6 million residents 16 and older now have at least one vaccine dose; more than 2.1 million have now completed their vaccinations as of Sunday’s update.

That works out to about 48.5 percent of the 16-and-older population completely vaccinated and about 60.1 percent with at least one shot, including nearly 88 percent of those 65 and older.

Friday’s report showed 560 people hospitalized with COVID-19 in Minnesota; 144 needed intensive care. Both figures continue to trend down from their recent peaks.

Seven newly reported deaths on Saturday brought Minnesota’s pandemic toll to 7,231. Among those who have died, about 61 percent had been living in long-term care or assisted-living facilities; most had underlying health problems.

The state has recorded 587,762 total confirmed or probable cases so far in the pandemic, including the 810 posted Sunday — the lowest daily total since mid-March. About 97 percent of Minnesotans known to be infected with COVID-19 in the pandemic have recovered to the point where they no longer need to isolate.

Regionally, all parts of Minnesota are in better shape than they were in late November and early December. Case counts had been creeping up the past few weeks across the state, but the trend appears to have peaked.

Officials continue to implore Minnesotans to keep their guard up during proms, graduations and other spring events, noting that more contagious COVID-19 variants are driving new cases across the state.

“There is still an extremely high level of virus circulating all over the state,” Health Commissioner Jan Malcolm told reporters earlier this week.

While the overall trends are solid, officials are increasingly concerned about the spread of COVID-19 in younger people. They’ve been urging more testing of middle and high school students and weekly testing for athletes, coaches, referees and other youth sports participants.

People in their 20s still make up the age bracket with the state’s largest number of confirmed cases — more than 109,000 since the pandemic began.

The number of high school-age youth confirmed with the disease has also grown, with more than 48,000 15-to-19-year-olds known to be infected during the pandemic.

Although young people are less likely to feel the worst effects of the disease and end up hospitalized, experts worry they will spread it unknowingly to older relatives and members of other vulnerable populations. Those with the COVID-19 virus can spread it when they don’t have symptoms.

People attending proms, graduations and other youth-oriented events are a special concern now for health officials.

The work by schools and districts to build safeguards into those events “can be completely undermined if students and parents don’t do their part, as well,” state infectious disease director Kris Ehresmann told reporters recently.