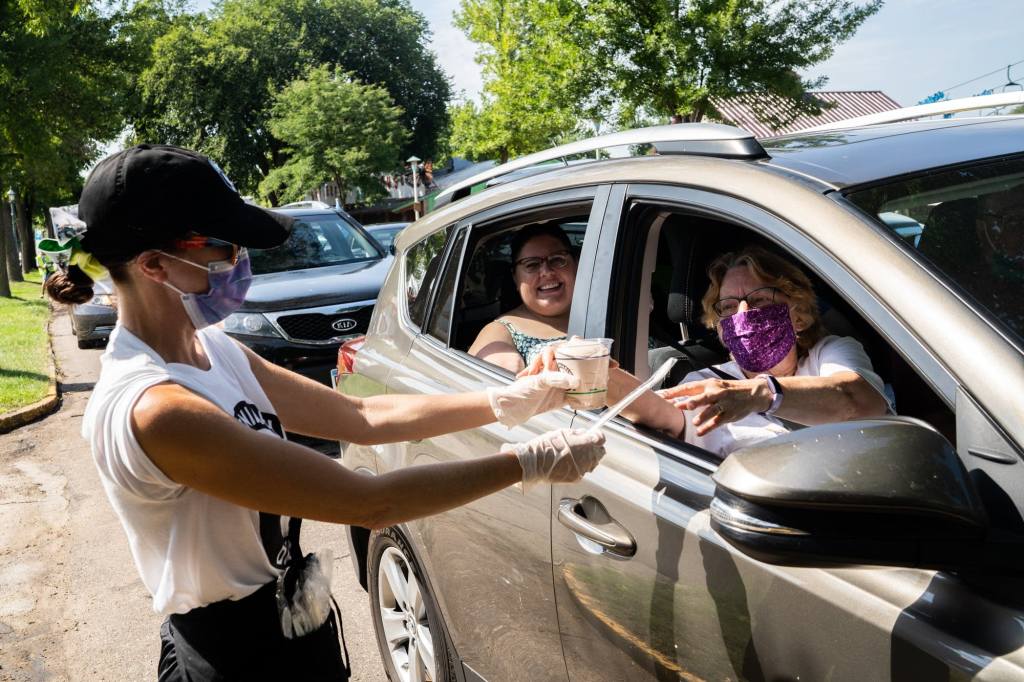 Addie Braun serves a milkshake to Kathy Lafayette inside of her car during the State Fair Food Parade in Falcon Heights in August 2020. Gov. Tim Walz said this week that he is optimistic about things like the State Fair returning to close to normal sometime this summer. Evan Frost/MPR News 2020

Minnesota officials continue to urge residents to stay vigilant against spreading COVID-19. But as May begins, the outlook is brightening for a relatively normal summer.

Conditions have improved significantly since mid-April around new cases, active cases, hospitalizations and other metrics — enough so that Gov. Tim Walz in coming days is expected to loosen some curbs on public gathering spaces, likely increasing capacity limits for bars, restaurants and other venues.

“There’s probably only a couple turns left,” on the state’s reopening dial, Walz said Friday. He predicted the Minnesota State Fair in August would be “a pretty close to normal event” this year after COVID-19 canceled it in 2020.

“Everything looks to me on the horizon in the way the vaccine is going and the way the virus is responding,” he said.

Public health leaders remain concerned about the flattening pace of vaccinations and what seems to be a wavering public will around mask wearing and other precautions. They continue to implore Minnesotans to keep their guard up during proms, graduations and other spring events, noting that more contagious COVID-19 variants are driving new cases across the state.

“These kinds of events are ripe for spread” unless people stay on guard, Minnesota Health Commissioner Jan Malcolm said Thursday.

Officials also recently confirmed 22 COVID-19 cases linked to recent protests in Brooklyn Center over the police killing of Daunte Wright. Half of those cases were found among law enforcement. The Health Department urged anyone at the protests to get tested.

The count of known, active cases came in at 15,638 in Friday’s numbers, higher than the prior day but down from the most recent peak of about 20,000 in mid-April. The seven-day trend line is at its lowest point in more than three weeks.

The percentage of COVID-19 tests coming back positive remains just below the 5 percent threshold that experts find concerning.

Hospitalizations had been climbing the past few weeks, hovering at levels not seen since January.

Friday’s numbers showed 619 people hospitalized with COVID-19 in Minnesota; 166 needed intensive care. Both figures are down from the prior week. Hospitalizations can often stay higher for several weeks following an increase in active cases.

Sixteen deaths reported Friday brought Minnesota’s pandemic toll to 7,144. Among those who have died, about 61 percent had been living in long-term care or assisted living facilities; most had underlying health problems.

The state has recorded 575,812 total confirmed or probable cases so far in the pandemic, including the 1,877 posted Friday. About 96 percent of Minnesotans known to be infected with COVID-19 in the pandemic have recovered to the point where they no longer need to isolate.

Regionally, all parts of Minnesota are in better shape than they were in late November and early December. Case counts had been creeping up the past few weeks across the state, but the trend appears to have peaked.

Minnesota’s vaccination pace remains relatively flat as officials work now to reach out to those who haven’t been vaccinated.

More than 2.5 million residents 16 and older now have at least one vaccine dose, and nearly 1.9 million have completed their vaccinations, as of Friday’s update.

That works out to about 43 percent of the 16-and-older population completely vaccinated and 57 percent with at least one shot, including about 87 percent of those 65 and older.

The state’s vaccination efforts have been hampered the past few weeks by supply cuts, particularly of the Johnson & Johnson vaccine, which federal authorities paused earlier this month as they investigated the possibility of rare side effects associated with the shot.

The pace may pick up, after federal health officials lifted the pause on using the Johnson & Johnson vaccine. But the recent production breakdown that resulted in millions of J&J doses ruined is having an impact.

Officials also acknowledge the state must do more to connect unvaccinated people to shots.

The Health Department estimates about about 3.4 percent of Minnesotans who’ve received their first dose of a two-dose regimen are late for their second shot. Nationwide, about 8 percent of Americans have skipped out on their second dose, according to the Centers for Disease Control and Prevention.

While the overall trends are solid, officials are increasingly concerned about the spread of COVID-19 in younger people. They’re urging more testing of middle and high school students and weekly testing for athletes, coaches, referees and other youth sports participants.

People in their 20s still make up the age bracket with the state’s largest number of confirmed cases — more than 106,000 since the pandemic began.

The number of high school-age youth confirmed with the disease has also grown, with more than 46,000 15-to-19-year-olds known to be infected during the pandemic.

Although young people are less likely to feel the worst effects of the disease and end up hospitalized, experts worry they will spread it unknowingly to older relatives and members of other vulnerable populations. Those with the COVID-19 virus can spread it when they don’t have symptoms.

The work by schools and districts to build safeguards into those events “can be completely undermined if students and parents don’t do their part, as well,” Kris Ehresmann, the state’s infectious disease director, told reporters Thursday.