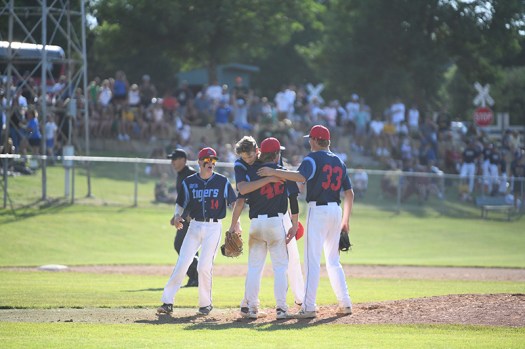 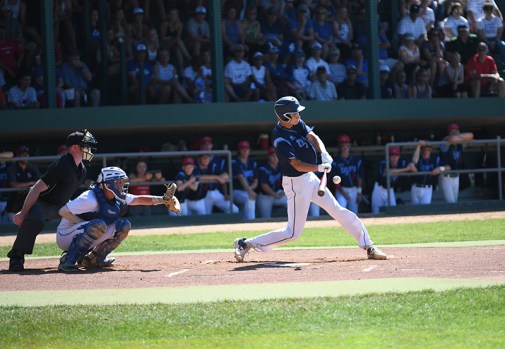 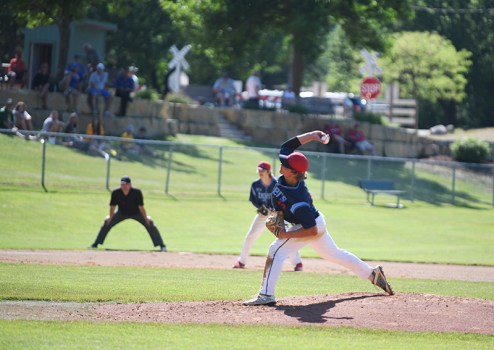 Senior Blake Ulve fires in a pitch early in the game Tuesday afternoon. Ulve pitched the whole game for the Tigers, giving up three runs on eight hits while striking out one and walking four. Tyler Julson/Albert Lea Tribune

JORDAN — The Albert Lea baseball team traveled to Mini Met Park in Jordan Tuesday afternoon to compete in the opening round of the Minnesota state baseball tournament, something they hadn’t been a part of since 1969.

The quarterfinal matchup saw the No. 7 seed Tigers (12-11) taking on a tough No. 2 seed in the Sabres of Sartell (21-3). While the Tigers gained some momentum by taking an early lead, they were unable to hold on, coming up just short 3-2.

Neither team was able to take an advantage over the other through the first three innings. The Tigers left one runner stranded in each the first and second inning, while the Sabres left two runners stranded in both the second and third.

Finally, in the fourth inning, the Tigers drew first blood. Senior Blake Ulve reached second on a two-out two-base fielding error, and was subsequently batted in by fellow senior Joey Flores, who hit a line drive to center field to score the run.

Sartell then left another two runners on second and third bases in the fourth inning after a ground ball ended the inning.

Albert Lea added another run in the fifth inning after senior Cody Yokiel led off the inning with a walk and was followed by junior Cam Davis reaching base on an error. Junior Brennan Bakken then hit a groundout, but brought Yokiel in for a score in the process, giving the Tigers a 2-0 lead.

The Sabres cut into the lead in the bottom of the fifth inning, scoring their first run using two singles and a hit-by-pitch.

Three quick outs at the plate by the Tigers put the Sabres back on the offensive where they evened the game at 2-2 using a walk and an RBI double.

With the game tied 2-2 heading into the final inning of regulation, the Tigers got a bit of a kick when Yokiel and Jellinger got on base, but two strikeouts ended the inning before they could score.

The Sabres came back out, hitting one pop fly before sending one over the fence to win the game and end the Tigers season.

The Tigers got multiple hits out of Jellinger and one hit each from Ulve and Flores.

Ulve started on the mound and pitched the whole game. He totaled 6.1 innings, allowing three runs on eight hits while striking out one and walking four.

The Tigers end their historic season with a loss in the quarterfinals, making them one of the final eight teams in Class AAA. The team graduates seven seniors from the team who will undoubtedly be missed as they try to build on the successes of this season.