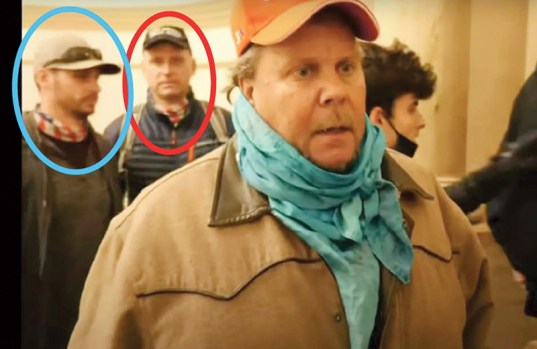 Daryl, red circle, and Daniel Johnson, blue circle, pictured in this screen capture included in federal court documents, have been chareged in the Jan. 6 breach of Capitol Grounds. Daniel, 29, is from Austin. Court documents state that both Daniel and his father Daryl were inside the Capitol during the riots. Photo provided 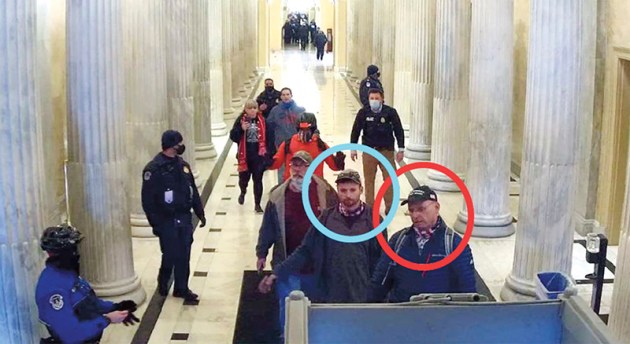 Daryl and Daniel Johnson, pictured in this screen capture included in federal court documents, have been chareged in the Jan. 6 breach of Capitol Grounds. Photo provided

An Austin man arrested Friday morning by Federal Bureau of Investigation agents and Austin Police officers has been charged in connection to the Jan. 6 riots at the U.S. Capitol building.

According to the criminal complaint, an individual called the FBI National Threat Operations Center on Jan. 7 to report that Daniel posted a video from inside the U.S. Capitol building during the riot onto his Snapchat account. The caller knew that Johnson had a cellular phone number ending in 8691.

On Jan. 18, another individual submitted a tip through the fbi.gov/uscapitol online portal which included a screenshot of a Facebook comment written by Daniel that stated, “I was one of the first ones inside the capitol building.”

The FBI received another tip on March 1 from an individual who alleged that Daniel and his father, Daryl Johnson of Iowa, were inside the U.S. Capitol building during the Jan. 6 riots.

During the investigation, the FBI uncovered videos of Daniel and Daryl inside the U.S. Capitol building. The FBI also reviewed Daniel’s Facebook page, which showed a number of political posts around the time of the riots. In one post, dated Jan. 7, Daniel posted a photograph of the Jan. 6 crowd near the U.S. Capitol building with the caption, “Couple thousand?? Lol try like 4 million people!!! (sic)”

Daniel’s arrest was announced in a Friday morning tweet by the FBI’s Minneapolis office, stating:

“Daniel Johnson, 29, of Austin, MN was arrested by #FBI Minneapolis special agents and Austin PD this morning on charges relating to criminal acts at the U.S. Capitol on January 6, 2021.”

— Eric Johnson contributed to this story