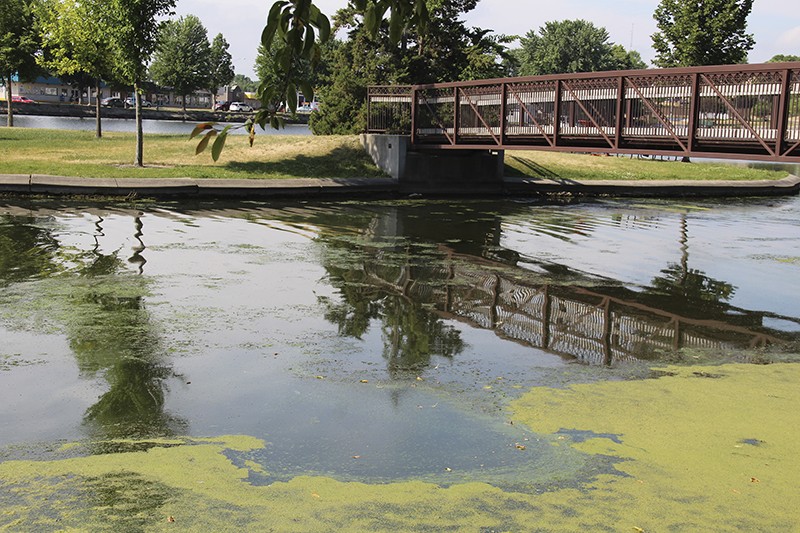 The Shell Rock River Watershed District confirmed blue-green algae Thursday near Katherine Island on Fountain Lake. The organization said certain varieties of the algae can produce toxins that are linked to illness in people and animals. Sarah Stultz/Albert Lea Tribune

Blue-green algae has been confirmed on Fountain Lake near Katherine Island, according to the Shell Rock River Watershed District.

The district is warning the public to avoid recreating in waters that have a blue-green algae bloom, as certain varieties of the algae can produce toxins that are linked to illness in humans and animals. The city of Albert Lea and Freeborn County Sheriff’s Office announced Friday morning they have closed City Beach until further notice.

According to a press release from the Watershed District, blue-green algae is often referred to as algae but is actually a type of bacteria called cyanobacteria.

Blue-green algae is normally present in Minnesota lakes during the summer because the bacteria thrives in warm, shallow, nutrient-fresh waters, according to the Minnesota Pollution Control Agency.

Scott Christenson, conservation technician with the Shell Rock River Watershed District, said blue-green algae is often described as looking like pea soup or spilled green paint and is more likely to occur in calmer, warmer areas of the lake where there are less likely to be waves or wind.

He said recent temperature readings have shown that water has warmed from about 64.5 degrees Fahrenheit at the beginning of June to 75 degrees. He noted that 75 degrees is the temperature that can trigger a bloom.

He said the drought conditions and early warm conditions have likely contributed to the bloom, noting that in a normal year water is regularly flushing into Fountain Lake from Wedge and Bancroft creeks.

Rain forecasted for this weekend and early next week should help clear up the bloom, he said, though he advised people to stay out of the lake if they have any doubts.

According to the Minnesota Department of Health, people can get sick if they swallow, have skin contact with or breathe in airborne water droplets while swimming, boating, waterskiing, tubing, bathing or showering in water that has harmful algae. Symptoms can begin hours to two days after exposure, including symptoms such as vomiting, diarrhea, rash, eye irritation, cough, sore throat and headache.

“The SRRWD can’t control the rainfall, heat, water temperature, or eliminate blue-green algae,” the release stated. “The best thing we can do is reduce the amount of nutrients getting into the lake.”

People should consider sweeping leaves, trash and other debris off the storm drains, which flow directly to the lakes, and should also make sure to pick up and properly dispose of pet waste.

“While these practices will not reduce the algal bloom immediately, they are the best long-term solutions to minimizing the frequency and intensity of the algal blooms,” the release stated.

As of Friday morning, no other blooms had been found on the lake, but Christenson said people should call the Watershed District if they think they have found others.