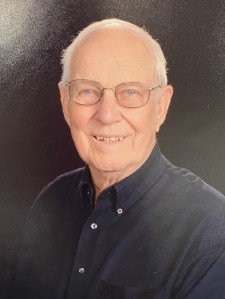 Buddy was born to Quay and Marjorie Bonfy on November 29, 1931 in Skedee, OK. He grew up on a farm near Ponca City OK. He graduated from Oklahoma State University with a Bachelor’s degree in Animal Science. He was a member of the Livestock Judging Team and ROTC. He married the love of his life Phyllis Ann Bay on Oct 1st, 1954.

In 1955-1956 Buddy served as First Lieutenant and executive officer in Battery C, 775th Field Artillery Battalion, 7th Army at Stuttgart, Germany. While serving, Phyllis joined him and they traveled throughout Europe. He was a member of the American Legion.

In 1957 Buddy began his career at Wilson Sinclair. He was a Livestock Buyer in Oklahoma City, Saint Joseph, MO, and Albert Lea, MN. He was the Head Hog Buyer in Des Moines, IA, Omaha, NE and was then transferred back to Albert Lea. He received the Honorary Swine Honor Roll Award in 1985 from the Minnesota Pork Producers Assn. He retired from Seaboard Farms in 1996.

He was an active member at Zion Lutheran Church in Albert lea and assumed many roles within the church.

In retirement Buddy enjoyed traveling with Phyllis throughout the United States in their RV. He loved their home in the country and enjoyed gardening, yard work, bird watching, and raising livestock. His hobbies included woodworking, collecting granite ware and antiquing. He enjoyed bowling, golf, and playing bridge with friends.

Buddy was a devoted husband, father, and grandfather. He had a kind and thoughtful spirit and was very loved by his family.

He is preceded in death by his parents, Quay and Marjorie Bonfy; son, Martin Lee Bonfy; and sister, Wilma Roady.