Carolyn Hanson Rawlings, 75, passed away June 4 at her home in Lake Mills after a brief bout with cancer. 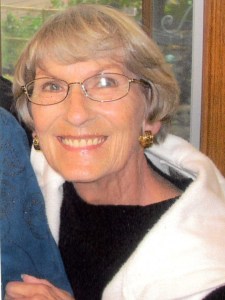 Carolyn Louise Hanson was born on Nov. 24, 1945, in Forest City, Iowa to Kenneth and Alpha Hanson of rural Lake Mills. She grew up on the family farm near Lake Mills and attended the Lake Mills Community School, graduating in 1964.

In 1965 she married Keith Schroder and they lived in Des Moines for many years. That union produced two children, Eric and Nicole. They later divorced. In 1984 she married John Rawlings in Harlan, IA. They celebrated 36 years of marriage last December.

A proud farm girl, Carolyn was smart, feisty, stubborn and independent—necessary qualities in contending with four brothers. She was Dad’s favorite; Mom’s devoted daughter. Despite a dis- like of cooking, Carolyn was a Betty Crocker Homemaker of the Year awardee in high school. She was an ardent Elvis fan (saw him twice in concert). After her parents’ passing, she was her family’s go-to lefse maker, holding her ‘in-service lefse workshops’ during the holidays. Over the course of her working life, Carolyn was a business owner, seamstress, insurance agent, food broker rep. She was a skilled gardener and operated a garden/gift shop business for several years near Garner, IA with John. Carolyn followed her own path, did things her way, always with kindness and generosity. She will be missed and remembered by many.

Carolyn is preceded in death by her parents and her brother Wayne.

Also surviving are her brothers that she adored and was close to her entire life: Larry Hanson, Minneapolis, MN; David (Annie) Hanson and Dennis (Kathy) Hanson, all of Lake Mills; thirteen grandchildren, two great-grandchildren, several special nephews and nieces and their families, as well as numerous longtime friends.

Memorials may be made to St. Croix Hospice or to the family.