Donald LeRoy Wermedal, 89, of Wells, died Monday, June 7, 2021 at St. Mary’s Hospital in Rochester, MN. Memorial Service will be held 2:00 PM on Monday, June 14, 2021 at Bruss-Heitner Funeral Home in Wells, MN, with Pastor Don Rose officiating. Visitation will be one hour prior to the service at Bruss-Heitner Funeral Home. Military Honors will be accorded by the Wells Color Guard. Interment will be at Rosehill Cemetery in Wells, MN. The family requests memorials to the Alzheimer’s Association.  To leave an online condolence, please visit www.brussheitner.com 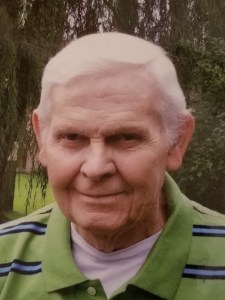 Don was born August 28, 1931 to Hilmer M. and Annette “Nettie” (Brudvig) Wermedal on their family farm near Scarville, Iowa. After graduating from Kiester High School in 1949, he helped run his father’s dairy farm prior to being drafted into the Army during the Korean War. He served two years at Fort Campbell, Kentucky in the 100th Army Airborne Division, advancing to the rank of corporal prior to an honorable discharge in 1955.

Shortly after leaving the Army, Don was united in marriage to Lorna M. Culbertson on September 9, 1955. The couple made a career of dairy farming. Don was employed at Spiering Tile and Drainage Company, later he was employed at  Wilson Foods/Farmstead Foods plant in Albert Lea.

Don was serious about his faith and was an active member of Calvary Baptist Church. He was also a member of Crossroads Church in the later years.

Don’s favorite way to spend time was with his grand-kids (12) and great-grand kids (5). Grandpa was the preferred playmate into the family’s second and third generations, everyone wanted to sit next to Grandpa at the table, or take Grandpa for a walk, his characteristic gentleness and patience made him popular with the kids.

Don, Dad, Grandpa will be deeply missed by his family; warmed by the memory of being loved by him.