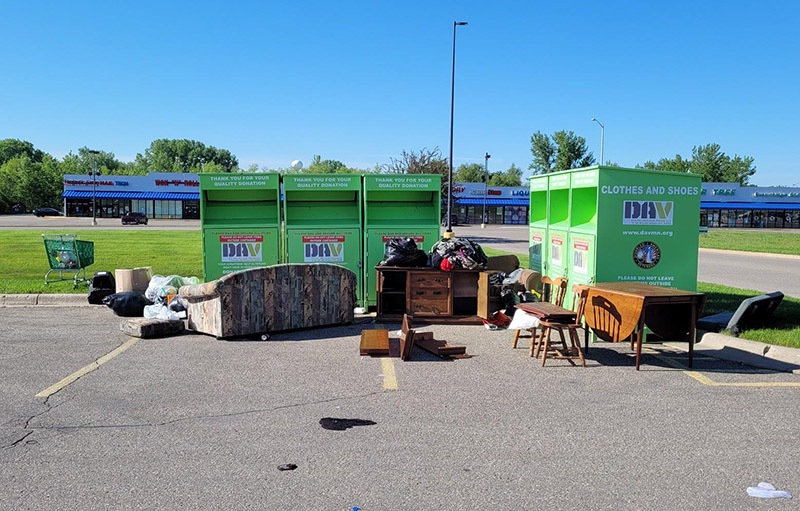 Many people have expressed dismay this week to see photographs of couches, furniture, a TV and other bags of items left outside the Disabled American Veterans donation boxes near Walmart.

The boxes are intended to collect small items such as clothes and shoes and go to support veterans in Minnesota.

The DAV works with Savers stores in Minnesota to provide them with usable personal clothing and small houseware items, and then in turn, the DAV is given a check for the pounds of goods supplied.

The funds raised are used to help veterans and families in Freeborn County. They are also used to pay rent on storage bins where all of the organization’s medical equipment is stored and to buy replacement batteries and parts for powered wheelchairs. In addition,  the DAV buys and supplies wheelchairs, walkers, canes, crutches and knee scooters.

The organization has clearly labeled on the outside of each donation box about how to use them and what the acceptable donations are in them. Just as clearly, it also states that people should not leave donations outside the containers.

Despite the precise directions, however, some still feel the need to leave behind more than what will fit in the boxes.

Unfortunately this is not the first time we have seen such disrespect at these boxes. The Salvation Army also used to encounter this same problem when it had several donation boxes around town, and it occasionally also has people who illegally dump items outside it’s thrift store.

In fact, this week, police logs show someone illegally dumped items two times outside the Salvation Army thrift store, too.

People who dump these items might be happy to get them out of their possession, but what they may or may not realize is that any items left behind are exposed to the weather and animals and are essentially left ruined. These items do not benefit these organizations — in fact, they hurt them.

The DAV and the Salvation Army instead have to take money that could be used to help people in our own communities and instead use some of that money to dispose of the now trashed items.

We ask people to think twice before doing this in the future.