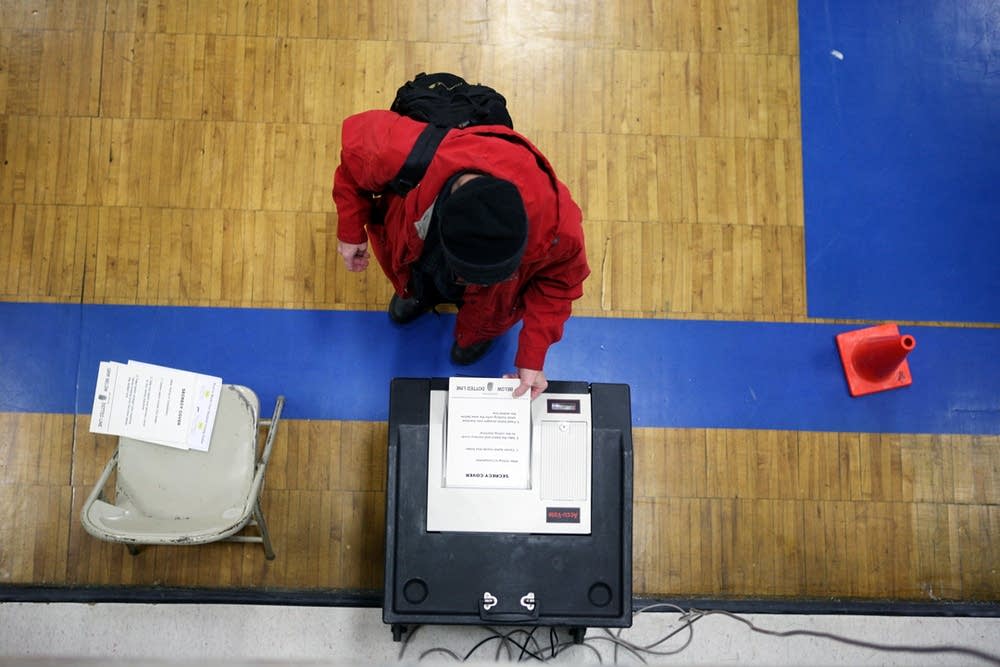 A voter placed a ballot in the ballot box at St. Paul's Merriam Park Recreation Center in 2011. Activists are hoping to give felons an expanded right to vote. Jeffrey Thompson/MPR News 2011

A lawsuit appealed to the state Supreme Court argues that people convicted of felonies should be able to vote after serving their jail or prison sentence. It’s an issue that Minnesota lawmakers are not taking up for now, but civil liberties activists are trying to keep alive.

Under current Minnesota law, those convicted of a felony are not allowed to vote if they are currently serving a sentence, including probation, parole or supervised release. The law applies even to felons sentenced to probation and who have not served any prison time.

“It effectively said that because they have been convicted of a felony, they can’t vote even though they have been deemed able to work, to live in the community, to pay taxes and to do all the other wonderful things that you know, community members do,” said David McKinney, an attorney with ACLU Minnesota. “Yet, they have been deprived of this particular right until this arbitrary point of completing all aspects of their sentence.”

The ACLU said there are more than 53,000 people across the state who are on probation or on some kind of release and are not able to cast ballots.

The Minnesota Court of Appeals rejected the ACLU’s case in May, saying the state statute is not unconstitutional.

Elizer Darris is one of the plaintiffs in the suit. He’s on probation currently and can’t vote until 2025.

According to the National Conference of State Legislatures, two states and the District of Columbia allow those convicted of a felony to vote, even while incarcerated. Minnesota is one of 17 states that require a person to finish their sentence, including parole or probation, before voting rights are restored. Twenty states restrict voting rights of felons only while they are incarcerated. In 11 states, people can lose their voting rights if they commit certain felonies.

One disagreement is over what constitutes proper punishment for a felony. Some say the probationary period is part of the sentence, and during that time, you should not be allowed to vote.

State Sen. Scott Newman, a Republican from Hutchinson, said the current law should stand as it is. He argues that many convicted felons in Minnesota are given probation instead of jail time, which he doesn’t necessarily oppose. “I’m simply saying that they have not yet proven that they can walk among us without committing crimes.”

“So before I’m willing to give them the right to vote, they are going to have to prove to me that they aren’t going to commit any more crimes in the future,” Newman added.

The Republican lawmaker said in cases where there is an excessively long probation period, he’d be open to allowing some people who have served a portion of their probation the right to vote.

McKinney said racial disparities in the criminal justice system mean denying the vote in this way affects people unfairly. And McKinney argues that because the Minnesota Legislature has failed to act on this issue, the state Supreme Court should step in.

“The courts have an ability to review and in reviewing ought to apply a strict standard of review on a case that involves the fundamental right to vote and clear, undisputed racial disparities,” McKinney said.

The Ramsey County attorney and cities of St. Paul and Minneapolis have filed briefs supporting the suit, the ACLU attorney said.