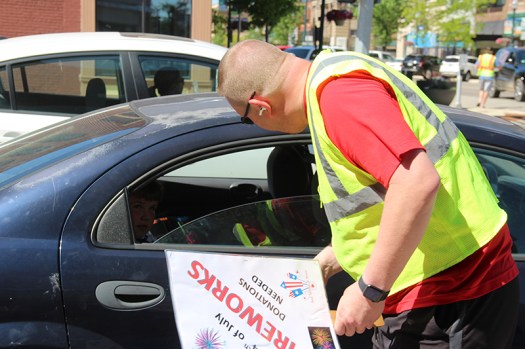 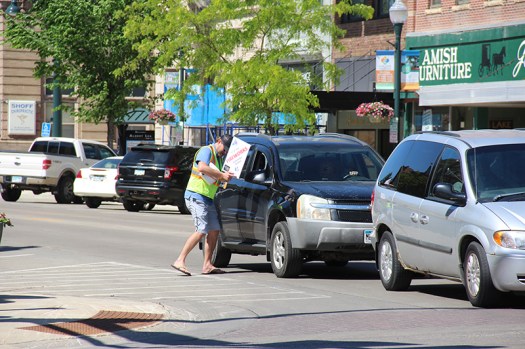 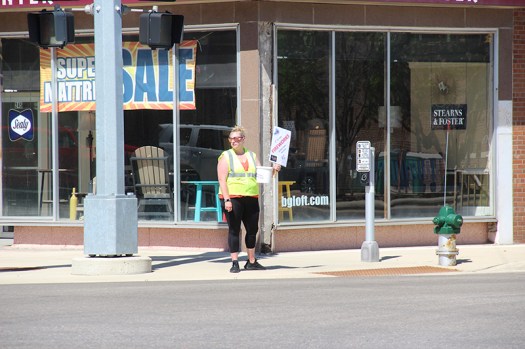 A volunteer stands with a bucket and sign to raise money for the annual Fourth of July fireworks. Sarah Stultz/Albert Lea Tribune

Volunteers take to the streets to collect money for display

After a year without fireworks because of the COVID-19 pandemic, volunteers lined the corner of Broadway and Main Street again Friday to collect money for the annual Albert Lea Fourth of July fireworks.

The fundraiser, put on by the Albert Lea-Freeborn County Chamber of Commerce and KATE Radio, aimed to raise $17,000, said Geri Jensen, event and social media coordinator with the chamber. As of 3:45 p.m., the volunteers had collected $12,930.

Jensen said the morning started off slow before picking up around lunchtime.

KATE Radio broadcasted live from the fundraiser throughout the day, providing updates on the money raised and conducting interviews with people including Tom Jones, Mayor Vern Rasmussen, District 27A Rep. Peggy Bennett, veterinarian Dan Smith and a representative from the Eagles Club who brought a donation.

Ryan Cafourek, a Chamber Ambassador who volunteered Friday afternoon, said he has a house on the lake and hosts a party each year for the holiday and enjoys watching the fireworks.

“I think it’s pretty special we can fundraise this all in one day,” Cafourek said.

The Ambassadors each volunteered two-hour shifts for the cause.

Though the fundraiser likely came in short of its goal, Jensen said people who may not have had the chance to donate can still drop off or send in money to the chamber, at 132 N. Broadway.

Donation buckets are also at the Shell gas station and Skyline Liquor.

Taco John’s in Albert Lea is also conducting a fundraiser through June 15 for the effort.