Hundreds expected in northern Minn. to protest Line 3 this weekend 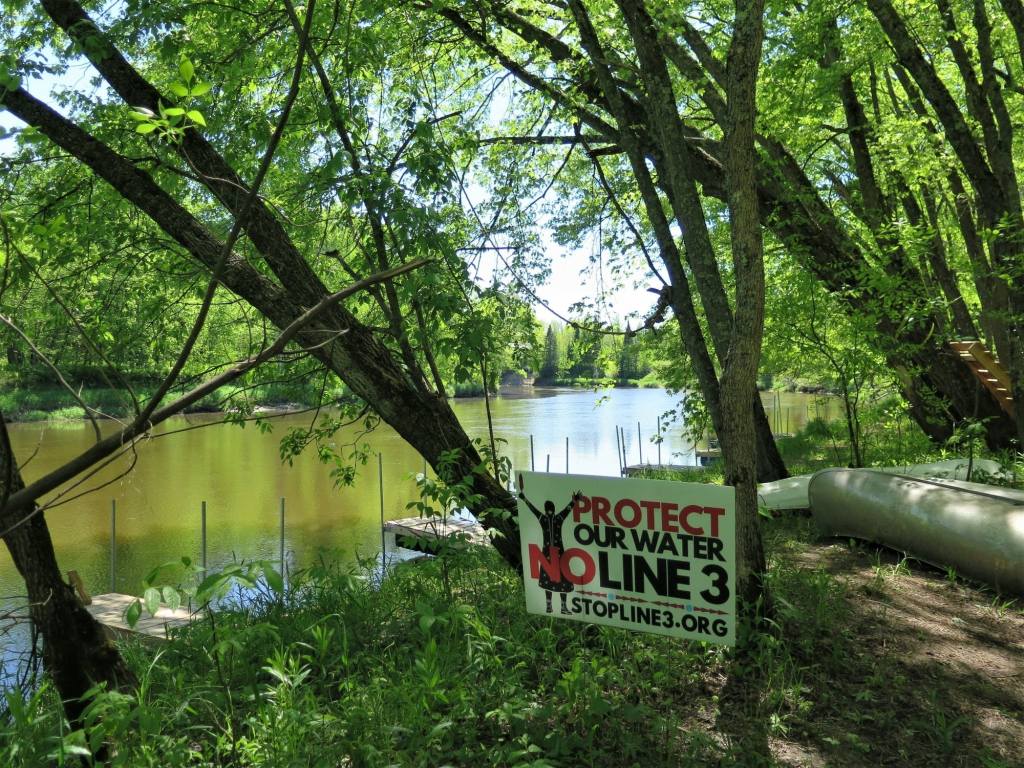 Canoes rest on the banks of the Mississippi River in Aitkin County at one of the resistance camps established by water protectors who oppose the Line 3 oil pipeline project. Water protectors have been encouraging people to get out on the river with boats and connect with the river. Kirsti Marohn/MPR News

Organizers say more than 1,500 hundred people from around the country are expected in northern Minnesota this weekend for what they’re calling the “largest resistance yet” to the ongoing construction of the Line 3 oil pipeline project.

The Treaty People Gathering, which will be based on the White Earth Reservation, is expected to include speeches, rallies and coordinated acts of civil disobedience, in which pipeline opponents hope to block work on the multi-billion dollar project.

It’s a key moment for the groups fighting the project. Since Minnesota utility regulators first approved Line 3 in 2018, opponents have pledged stiff resistance. The new pipeline, which replaces the current, aging Line 3, would transport nearly 800,000 barrels of Canadian oil across northern Minnesota every day.

So far, cold winter weather and the COVID-19 pandemic have kept protests relatively small since construction began in December. This weekend’s event could signal a shift in the scale of opposition.

“You’re not just being asked to come as an eco-tourist,” said Tara Houska, founder of the Giniw Collective, one of dozens of groups spearheading the gathering, in a welcome video encouraging others to join them.

“You’re being asked to come and stand with the earth and stand with us and stand up for someone who’s not yet here,” she said. “That’s a very serious responsibility, and it’s one that shouldn’t be taken lightly.”

Enbridge Energy says work on the project is over half complete. Construction resumed on June 1 after a two-month pause during the spring thaw. The company expects 4,000 workers to be on the ground by mid-June and for the pipeline to be completed and in-service by the end of the year.

Enbridge is replacing its existing Line 3 pipeline, which is corroding and requires extensive maintenance, with a new pipe along a slightly different route across the state. The new, modern pipeline will be safer, the company says, and would be able to ship nearly twice as much oil as the current line.

Opponents — including environmental groups, several northern Minnesota Ojibwe tribes and the state Department of Commerce — have argued that Enbridge hasn’t proven there’s enough demand for the new Line 3. The Minnesota Court of Appeals is expected to issue a decision by June 21 on whether there’s a long-term need for the project in the state.

People fighting the pipeline also say it would worsen climate change, increase the possibility of oil spills in a water-rich part of the state and threaten treaty rights where the members of several different Ojibwe bands retain the rights to hunt, fish and gather wild rice on lands off their reservations.

Houska says more than 250 people have been arrested since construction on Line 3 began in December.

“Our people are saying, enough is enough. We need to protect what we have left here,” said Dawn Goodwin, a member of the White Earth Nation and one of the organizers of the gathering.

Dan Guida, sheriff of Aitkin County, one of several counties along the pipeline route, said demonstrators have been overwhelmingly respectful. He says he has no choice to arrest people when they trespass onto the pipeline route or lock themselves to equipment.

In many cases, he said, people “come with this intent to get arrested. It’s like a badge of courage. We’ve had people say, ‘What do I need to do to get arrested?’”

The Aitkin County Sheriff’s Office is part of the Northern Lights Task Force, an organization of agencies statewide that is coordinating the law enforcement response along the pipeline route.

Gov. Tim Walz on Friday said he does not plan to deploy the Minnesota National Guard during the gathering.

“We expect folks to exercise their constitutional rights, but we don’t expect folks to interfere with lawful construction or lawful practices,” he said. The law enforcement presence will be largely led by local agencies, he said.