Joel Eugene Thisius, age 87, of Wells, Minnesota, passed away at one of his favorite places, Sunset Bay Resort on Dead Lake in Richville, Minnesota on Sunday, June 6, 2021. A Funeral Service will be held Thursday, June 24, 2021 at 11:00 AM at Open Doors Wells United Methodist Church with Pastor Chris Leistra officiating. Visitation will be one hour prior to the service at the church. Interment will be at St. Casimir’s Catholic Cemetery in Wells, MN. Following the burial, a lunch reception will be held at the church to share fond memories and probably a few jokes which Joel always loved to tell. The family prefers memorials to the Mayo Clinic Mesothelioma Specialty Group. Bruss-Heitner Funeral Home is assisting the family. To leave an online condolence, please visit www.brussheitner.com. 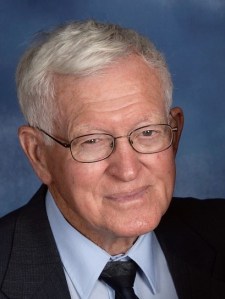 Joel was born on October 20, 1933, in Carlston Township, Freeborn County, Minnesota to Manville and Ruth (Haas) Thisius. He graduated from Freeborn High School in 1951. In 1955, Joel enlisted in the Army and completed his basic training at Fort Leonard Wood, Missouri, and Camp Carson, Colorado.

On March 27, 1955, Joel married his sweetheart, Joyce Ellen Kuechenmeister at the Congregational Church in Freeborn, Minnesota. Following their wedding, they lived in Tacoma, Washington while Joel was stationed at Fort Lewis with the Army Second Infantry Division and US Field Artillery Battalion. After Joel was honorably discharged, they returned to Wells, where he worked for Moll Implement and then the United States Postal Service as a City Letter Carrier who prided himself in knowing where everyone lived for over 42 years. Joel was an avid gardener who spent countless hours cultivating his vegetable and perennial gardens including grooming the decorative hedges and trees in his yard. Included in his yard time, Joel spent significant time caring for his feathered friends, keeping many bird feeders filled and a heated bird bath during the winter months so he could enjoy their presence year-round. Joel enjoyed woodworking, and his special passion was finding an old broken-down piece of furniture and bringing it back to life by fabricating parts and refinishing his project. Many family members and friends have been blessed to have received his treasures. Joel was an active member of the local Lions Club for 38 years giving endless service hours to the Athletic Banquet, community center bingo on Friday nights, and Fair parking projects. Joel attended the Wells Methodist Church where he was Head Usher and a Sunday School teacher for many years. As a Scout Webelos Leader for 19 years, Joel mentored many local boys including his three sons and later mentored his three grandsons to Eagle Scouts. Joel enjoyed playing cards with family and friends, belonging to Whist and Bridge clubs. Joel anxiously awaited the annual family fishing vacation, where he loved to fish. Largemouth bass were his favorite, mastering the art of slow retrieve Senko fishing, boating countless fish, only to release them to fight again, saying, “Thank you for your effort”. With over twenty trips to Alaska to visit their oldest son and wife, sightseeing and salmon fishing created cherished memories. Joel and Joyce were frequent bus tour travelers. Trips to Washington D.C., Utah, and New York were a few of their national favorites. Beyond any hobby, Joel loved to spend time with his family. He travelled countless hours to support his boys and grandchildren in sports, concerts, birthdays, and other family gatherings. Distance was never an excuse for not attending.

Joel was preceded in death by his parents; father and mother-in-law: Donald and Ruby (Krosch) Kuechenmeister; brothers-in-law and sisters-in-law: Adrian Staloch, Arlan Kuechenmeister, Diane Kuechenmeister and Jeannine and Khalid Ali.