Leonard George Wacholz, age 90, of New Richland, MN, died June 17, 2021 at St. John’s Lutheran Community on Fountain Lake in Albert Lea. He was blessed with 90 years of mostly good health and lived at home on the farm until March. Despite dementia taking away his ability to speak, in his last days he enjoyed visits (most in person, but some necessarily virtual) from scores of his extended family members and friends who were so dear to him and who will miss him terribly. 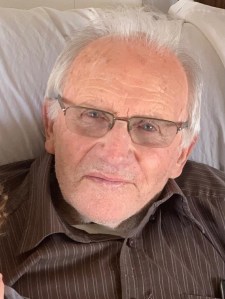 A Memorial Service will be held at St. Peter Lutheran Church in New Richland on Tuesday, June 22 at 11 a.m. with Rev. Scott Williams officiating. Visitation will be June 21 from 4-7 p.m. at the church, and one hour before the service. Bonnerup Funeral Home is assisting the family.

Leonard was born October 20, 1930 the son of George and Marie (Richter) Wacholz of rural Kiester, MN and baptized at Mansfield Lutheran Church. He graduated from Kiester High School in 1949 and was married to Arlene Hoelz of New Richland in 1957. They purchased a farm near New Richland where they raised their three children.

Leonard loved everything about farming and regularly spoke of how he saw God’s hand of blessing in the harvest. He was an extraordinarily hard worker who set a wonderful example of faithfulness for his children, grandchildren and great-grandchildren. As his sons took over and expanded the farm, he found great enjoyment in working alongside them, and in later years in monitoring the grain dryer and riding with them in the tractor and combine.

Leonard enjoyed traveling and seeing new places, but his favorite part of family vacations was meeting and getting to know new people, and he formed long-lasting friendships with random strangers he met in this way. He was patient, kind and generous and deeply loved his family, always putting their welfare ahead of his own.