Memorial Services for Marguerite Christensen will be held at Clarks Grove Baptist Church on Tuesday June 22, 2021 at 2pm. Pastor Kent Otterman will officiate. Visitation will be at the church one hour prior to the service. Interment will be at the Clarks Grove Cemetery. 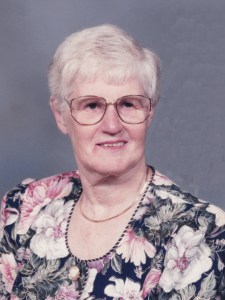 Marguerite (Wright) Christensen passed away December 22,2020 at Oak Park Memory Care, Albert Lea at the age of 97. She was born in Rockwell, IA on May 8, 1923 to Frank and Lillian (Kistler) Wright. Her family moved to Geneva, MN when she was 5 years old. She was baptized by immersion in Geneva Lake when she was 10 and walked with the Lord ever since. She received a scholarship to go to camp by passing a test on the Bible.

Marguerite moved to Clarks Grove when she was 15 and her friend Maurine (Kelly) Larson invited her to the Baptist Church. She graduated from Albert Lea High School in 1941. Marguerite met Wilmer Christensen through the church and they were married in the church April 1, 1945. They farmed on Wilmer’s home place. A tornado destroyed their farm and 14 building on April 30, 1967. Wilmer and Marguerite and Galen then bought a place north of Clarks Grove and farmed both farms.

Marguerite was very active teaching Sunday school and Bible school, President of the Farther Lights (women’s), Deaconess, Red Cross volunteer, Republican party volunteer, and involved in Creseal (a Christian retreat program). Marguerite attended Green Lake Baptist Assembly grounds for conventions. She also milked the cows when the men were in the fields as well as when Wilmer had health issues.

After the tornado of 1967 Marguerite took a job as a nursing assistant at Good Samaritan Center and worked there for 12 years. She took training to being able to pass medications while working there. She loved the residents and they loved her.

After Wilmer passed away in 2001, Marguerite moved to Texas to be by her daughter Peggy and family. She enjoyed being able to help babysit the great grandchildren. She met Howard Gore at church, and they married on August 21, 2005. Howard passed away January 2, 2007. Howard’s son, Ricky got engaged to Sandy and asked Marguerite to give him away at their wedding. She was honored to do this.

Milton Nelson came to visit Marguerite and they stayed up all night talking about their life in Clarks Grove. They had known each other since their teenage years, working together in church. Milton and Marguerite married at the Clarks Grove Baptist Church on July 27, 2008. She had always wanted a large family like her own and now she had 9 children and many grandchildren. She was most happy to move back to Clarks Grove and her church.

In lieu of flowers memorials are preferred to Clarks Grove Baptist Day Camp or Hospice.