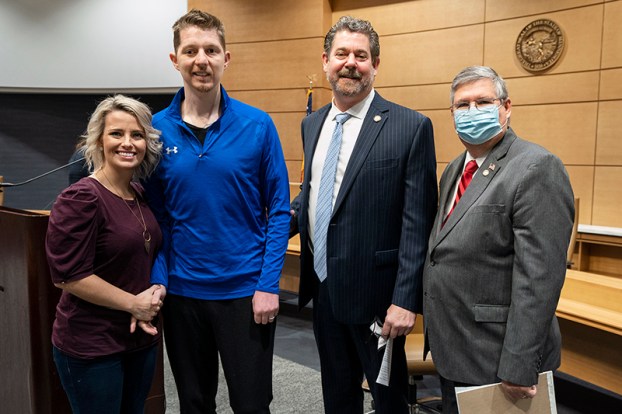 Sen. John Jasinski stands with Megan and Arik Matson and Rep. John Petersburg in April while lobbying for the passage of a bill that would increase the penalty for individuals who are convicted of assault that causes great bodily harm to a police officer, judge, prosecutor or correctional officer. Provided

The Minnesota Police and Peace Officers Association on Saturday named Waseca Officer Arik Matson as the 2020 Office of the Year during its annual convention in Alexandria.

The nominations for MPPOA Officer of the Year are based on “heroics, outstanding service or distinguished community involvement in service,” a press release states.

Recipients were selected by the MPPOA board of directors from many nominations and announced publicly on Saturday.

The award is considered a very high honor, as it is from the largest association representing public safety professionals in Minnesota.

Matson was shot and nearly killed in the line of duty on Jan. 6, 2020, while responding to a report of a suspicious person. He continues rehabilitation from a traumatic brain injury while inspiring officers and working to pass stronger penalties for certain crimes at the Minnesota State Capitol, the release stated.

“Officers run towards dangerous situations every day, and Arik’s demonstrating courage and bravery not only as an officer, but in his recovery,” said MPPOA Executive Director Brian Peters. “We are all Matson strong.”

St. Cloud Officer Ryan Priebe was named 2021 Officer of the Year. He was recognized for his exemplary and ongoing efforts to provide community safety, particularly in St. Cloud’s south side neighborhood, and his heroic actions the night of June 14, 2020.

Priebe is a 14-year veteran of the St. Cloud Police Department with specialized training as an instructor in the use of force, defensive tactics and firearms. He was also selected for the St. Cloud Police Department’s Community Out Post (COP House) Team, which focuses on community engagement and crime reduction through proactive enforcement and relationship building.

“Senator Gazelka is an incredible champion of law enforcement officers at the state Capitol,” Peters said. “His thoughtful approach to legislation prioritizes keeping communities safe and supporting those who protect and serve in law enforcement. Thank you, Paul Gazelka, for having our six.”

Named as 2021 MPPOA Legislator of the Year was Sen. Julie Rosen, R-Fairmont, who serves as chairwoman of the Senate Finance Committee and the Legislative Pension Commission.

“Basically, Sen. Julie Rosen is an advocate for every cop in this state and a fighter for increased public safety,” Peters said. “She has steadfastly stood against attacks on police officer protections, pensions, benefits and more. When faced with proposals that make the police profession untenable or unreasonably dangerous, Sen. Rosen took a leading role to stop them. Sen. Rosen is an incredible partner, and we’re pleased to recognize her efforts with this award.”

The release stated an additional award, the 2021 Bravery and Courage Award, was given to K-9 officer Bravo of the Anoka Police Department, who was shot in the neck during an incident Feb. 21. Since the shooting, Bravo spent time recovering and retraining and in May, returned to duty full-time.

The Albert Lea Art Center has a new fundraising event planned for next week inspired by a feature in Albert... read more