New MercyOne clinic about six weeks out from opening 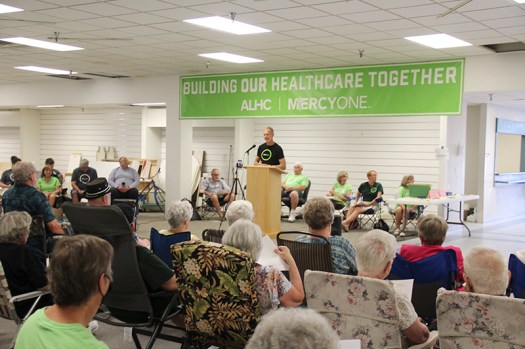 Brad Arends, president of the Albert Lea Healthcare Coalition, speaks to a group of supporters in the former Herberger's building, which is now called the John and Susan Morrison Medical Plaza. Sarah Stultz/Albert Lea Tribune 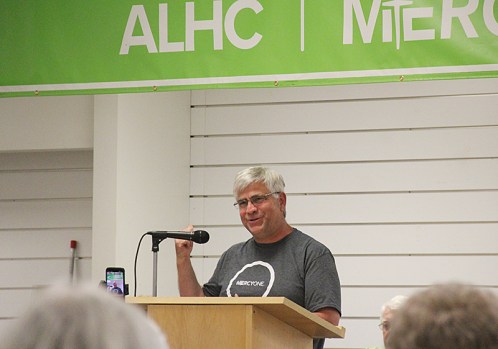 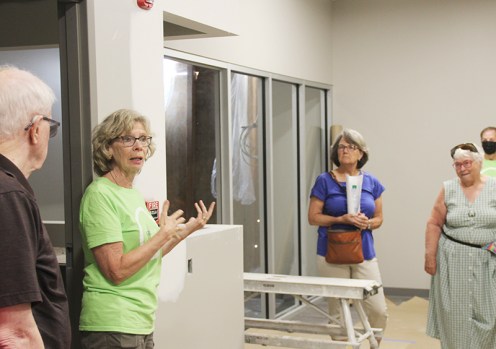 Jill Morstad, trustee for the Albert Lea Healthcare Coalition, leads a tour Sunday evening at the new MercyOne Albert Lea Family Medicine & Specialty Care. Morstad said there will be what is being referred to as a fever clinic in a portion of the clinic, which will have a separate entrance. Sarah Stultz/Albert Lea Tribune 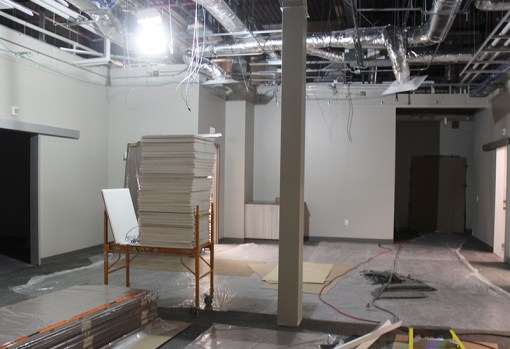 Staff in the new MercyOne Albert Lea Family Medicine & Specialty Care clinic will be centrally located near the patient rooms and will enter the rooms from the center of the building. The patients will enter the room through a door on the opposite end of the room. The clinic is slated to open for patients July 26 with an open house on July 24. Sarah Stultz/Albert Lea Tribune

About six weeks ahead of the open house for the new MercyOne Albert Lea Family Medicine & Specialty Care clinic in the former Herberger’s building in Albert Lea, supporters of the project got a peek Sunday evening of the progress of the new clinic.

Attendees also heard about two other medical companies going into additional space in the building, which will now be known as the John and Susan Morrison Medical Plaza.

Treasurer Steve Tufte of the Albert Lea Healthcare Coalition said Hearing Associates is slated to open in July in the medical plaza, while Big Stone Therapies is projected to open in October. Other medical companies have also expressed interest.

The first phase of the new MercyOne clinic is expected to open for public view July 24 and be open to patients July 26. It will be a culmination of a grassroots effort that started about four years ago after Mayo Clinic Health System in Albert Lea leaders announced that most inpatient services would be consolidated between the Albert Lea and Austin campus, moving overnight hospital stays, inpatient surgeries and labor and delivery to the Austin campus.

Though residents initially tried to save the services that were being moved from Albert Lea through the health system, they eventually shifted their efforts to instead recruit a new provider to the area. Nonprofit Albert Lea Healthcare Coalition was formed, and it has since purchased the former Herberger’s building at Northbridge Mall and partnered with MercyOne North Iowa Medical Center to open the new clinic in Albert Lea. The coalition will remain owners of the building.

The clinic will be built in phases, with the first phase opening in July to include a primary care clinic, urgent care, a specialty clinic and MRI capabilities over 14,000 square feet. Specialties include ear, nose and throat; urology; cardiology; sleep medicine, weight management/bariatrics; dermatology; neurosurgery; orthopedists; podiatry and plastic surgery. Potential specialty services include pediatrics, mental health, internal medicine and a dietitian.

A committee is looking at what services the clinic should include.

The clinic is expected to expand over the next five or six years as patient load increases, eventually adding an ambulatory surgical center by the fifth phase by 2026 or 2027 if patient demand is met. Albert Lea Healthcare Coalition President Brad Arends said Sunday many in the group don’t want it to end there and would like to also bring back labor and delivery to the community.

“There’s a lot of people that didn’t think this would ever happen,” Arends said of the effort.

Trustee Dave Mullenbach, who has overseen the construction from the Albert Lea Healthcare Coalition’s board of trustees, said the construction was coming along well and credited the contractors for their work.

The Healthcare Coalition has committed to $200 per square foot of the project, with the total phase one costs at about $5.5 million for the coalition, paid for with donations and loans. This also covered common retail space and repairs of the parking lot.

Tufte said $3.094 million had been received thus far in donations, including more than $1.8 million from three large donors, $730,000 from local businesses and about $515,000 from individuals.

About $1.39 million on top of that has been pledged, including $900,000 from MercyOne. The coalition has also received a $150,000 loan through Freeborn-Mower Electric Cooperative , and loans through the city of Albert Lea and the Albert Lea Economic Development Agency. A loan is also expected through Compeer Financial.

The organization is also looking for grants through corporations and charitable foundations to support the effort.

Beyond the first phase of the project, the organization will continue to reach out to the community for financial support, with an expected $8 million to $10 million in total needed through the end of the first five phases, Arends said. He said there is a committee constantly looking at new possible sources of funds.

Dr. David Heine, family medicine physician who will work at the new Mercy clinic and who can already be seen through the Mason City Clinic in the mall, said he is proud to be a part of the project and thanked the community for the support that has already been given to him and his wife.

“It’s so good to be a part of a project that comes out of the community,” Heine said.

Kristin Flatness, MercyOne manager, said there is presently a staff of seven, and an additional seven or eight people will be hired once the new clinic opens.