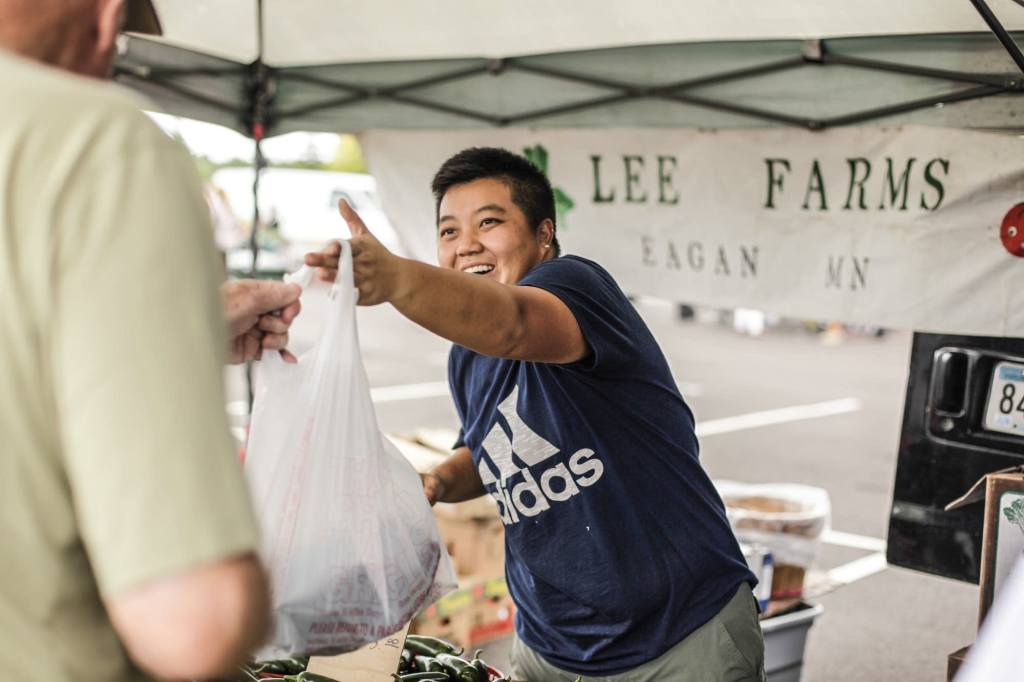 Mao Lee sells produce at the Maple Grove Farmers Market. Money for a program that helps Minnesotans with low incomes shop at farmers markets was not included in the compromise version of an agriculture budget bill legislators are considering in their special session. Maria Alejandra Cardona/MPR News 2017

Farmers markets are a summertime staple in many communities around Minnesota, but not everyone shopping at them has the means to pay farmers for what they grow.

A program called Market Bucks was designed to encourage some of those Minnesotans to use federal benefits — what used to be called food stamps and are now known as SNAP — to pay for healthy food at farmers markets. Participants get a $10 match when they spend $10.

“It’s important because it helps people who have limited food access, seniors and others, be able to have more fresh fruits, vegetables and Minnesota-grown products in their diet,” Moriarty said. “And that improves their health outcomes, and improves access to food that they might not otherwise have.”

The program doesn’t cost much compared to the overall $50 billion state budget.

The DFL-controlled House included $325,000 for Market Bucks in its agriculture budget bill, but the Republican-controlled Senate had nothing. The Senate position prevailed in negotiations. Sen. Torrey Westrom, R-Elbow Lake, the chair of the Senate Agriculture Committee, explained the position to members of the Finance Committee.

“This program essentially allows to double-dip for anybody on SNAP,” Westrom said. “The whole, overall view was there are other priorities or areas that are also competing for funding.”

Senate Minority Leader Susan Kent, DFL-Woodbury, said she has heard from farmers throughout the state who view Market Bucks as a valuable program. It should be a priority, Kent said.

“We need to have that done by July 1,” Peterson said. “So, if any consideration can be done, or we can work that out, it will leverage hundreds of thousands of dollars, not just for those who need it, but also our farmers.”

Top legislative leaders are aiming to wrap up the special session in about a week. Meanwhile, officials at Hunger Solutions are also looking for funding alternatives. They’re also circulating a letter signed by farmers markets, agriculture businesses and other organizations that urges lawmakers to explore all options.

“It helps farmers,” said Colleen Moriarty. “And it’s supportive of money spent in the local communities.”