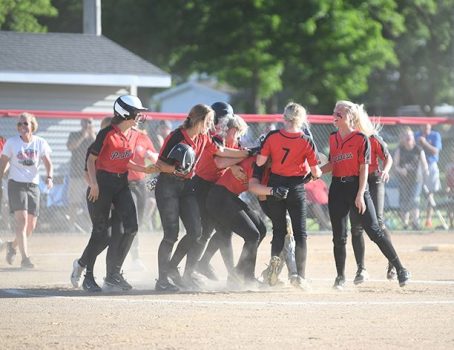 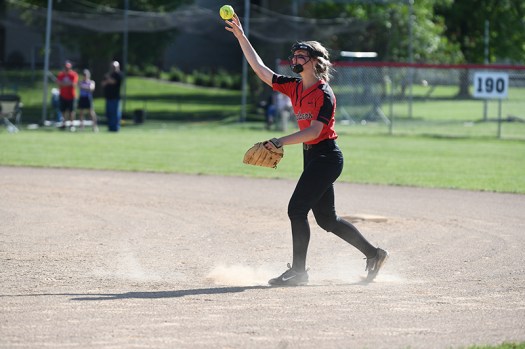 Hallie Schultz makes the throw from second base for an out at first base Thursday afternoon against Cannon Falls. Tyler Julson/Albert Lea Tribune 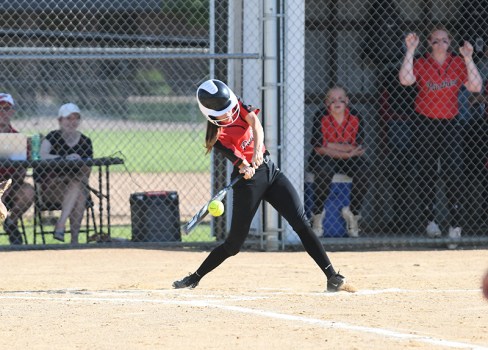 NEW RICHLAND — It was a nail-biting matchup Thursday afternoon as the No. 4 seed NRHEG softball team hosted No. 5 seed Cannon Falls in the quarterfinals of the Section 2AA playoff tournament.

The Panthers were tied or trailed the entire game until the very last at-bat, when junior Sophie Stork hit a two-run single that brought in the winning run and advanced them to the semifinals 4-3 over the Bombers.

It was in the top of the fifth inning when the Bombers scored the first runs of the game, taking a 3-0 lead.  The runs came after a two-out single scored one run and a two-run homer was launched over center field.

In the bottom of the inning, Faith Nielsen got on base in the first at-bat and quickly came around the bags and scored after a passed ball. Sidney Schultz reached safely after a two-out single, but a pop-out ended the inning in the next at-bat.

Neither the Bombers nor the Panthers got any baserunners on in the sixth innings, leaving the Panthers in a 3-1 hole entering the final inning of regulation.

After holding Cannon Falls scoreless in the top of the inning, NRHEG came to bat needing two runs to send the game to extras or three to win it outright.

Anna Jacobson opened the inning  with a lead off single and was moved along to second when Nielsen hit into a groundout. Brenlee Knudson was walked, and a single from Bree Ihrke brought in one run. Knudson and Ihrke advanced after an infield fly by Schultz. With two outs already on the board, Stork stepped up to the plate and quickly fell behind in the count 0-2. Determined not to let her team down, Stork hit a sharp grounder in the gap between third and shortstop, scoring both Knudson and Ihrke, and winning the game in walkoff fashion.

“Words cannot express how proud I am of these girls and their never-give-up attitude,” said head coach Wendy Schultz. “They fought hard to win this game.”

Stork also started in the circle for the Panthers, pitching all seven innings, allowing three runs on five hits, while walking one and striking out four.

The Panthers move into the semifinals of the winner’s bracket, where they will meet No. 1 seed LeSueur-Henderson at 2 p.m. today at Caswell Park in Mankato.