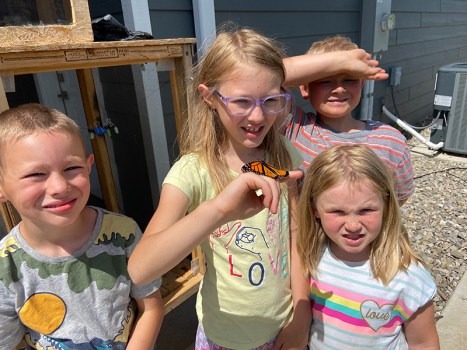 Ethan Haag, Grace Haag, Ethan Breuer and Madison Breuer stand next to a cage that has been used to house monarch caterpillars as they go through metamorphosis. The children rescue the caterpillars from the fields near the Breuer house. Provided 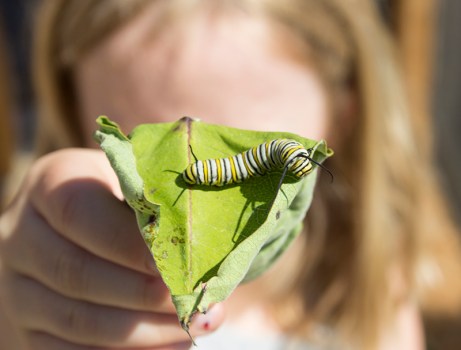 Madison Breuer holds a caterpiller on a leaf. The children help rescue the monarchs at all stages of life and care for them until their release. Abigail Chalmers/Albert Lea Tribune 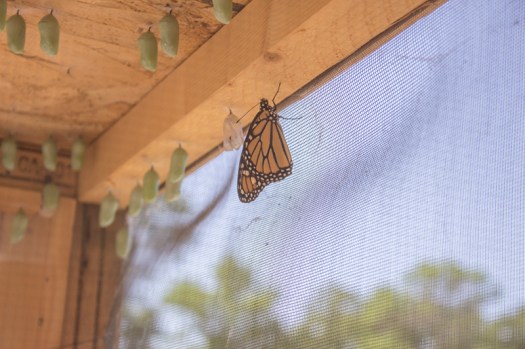 A newly-hatched butterfly clings to the cage's screen alongside many other chrysallides. Abigail Chalmers/Albert Lea Tribune 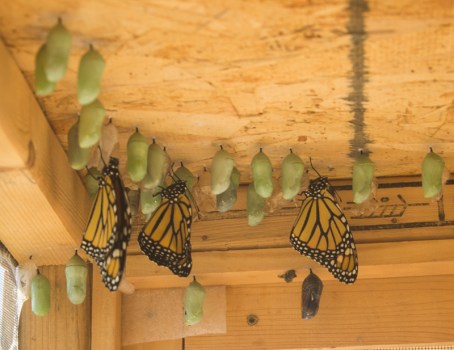 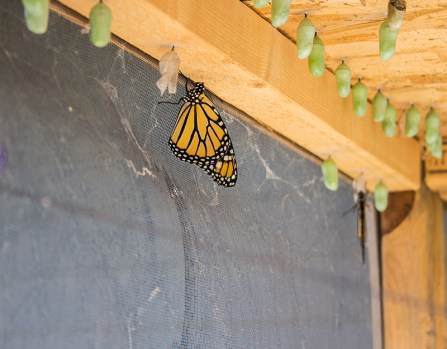 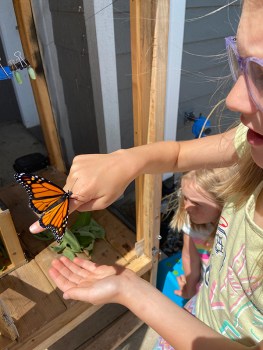 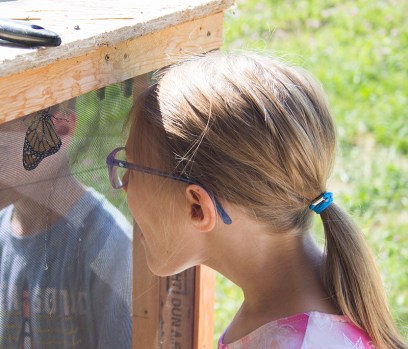 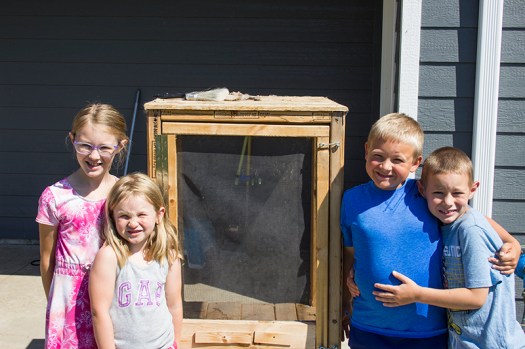 Grace Haag, Madison Breuer, Spencer Breuer and Ethan Haag stand next to the main monarch shelter. They have three other smaller enclosures to house more of the butterflies in earlier stages. Abigail Chalmers/Albert Lea Tribune

It has become more than just saving the butterflies

Brigitta Breuer, the Breuer children’s mother and the Haags’ caretaker, wanted them to stay healthy but still spend time outside, and working to protect the monarchs provided a safe pastime.

Monarchs rely on milkweed plants for their nourishment, but the pesticides farmers use to keep their crops safe can be fatal for the butterflies.

They started searching for caterpillars around the milkweed plants in the fields near their house. According to Breuer, the infected milkweed plants turn a sickly shade of yellow and become dangerous for the monarchs to consume. To keep the caterpillars from unintentionally poisoning themselves, the children would collect them and bring them back to their home. Breuer recalled one instance in which they discovered dozens of caterpillars all at once.

“We probably found 50 caterpillars, and they would’ve all perished,” she said.

After gathering the caterpillars and taking them back to the Breuer house, the children would place them in the cages crafted by the Breuer grandfather, Tim Breuer. The cages were constructed with wood and mesh screens that allowed the children to observe the metamorphosis process as it occurred.

The children sometimes spend several hours a day taking care of the monarchs, depending on how many caterpillars there are to feed. They also take the time to learn as much as possible about the butterflies.

“We are really trying to make this as much of a teaching activity as a fun and interesting one,” Breuer said. “They’ve learned about the life cycle and the different stages, and they’re super excited.”

They got most of their information from books checked out from the public library.

“I really tried to use our library as a resource,” Breuer said. “Miss Patty is amazing, and so, any books there, we rented and learned some more.”

In addition to reading up on the monarchs, the children record their collected data, including how many butterflies they have released and how many are in each stage. On Tuesday, Breuer said they had 139 in chrysalis form, 30 caterpillars and had let go of five butterflies. They also track the genders of the butterflies. Grace Haag explained the difference between male and female butterflies.

“There’s two black dots on the inside of the wing, and that’s a boy,” she said. “If they don’t have any dots inside the wing, that’s a girl.”

Though the children have learned much about monarchs and how to care for them, Breuer wants it to be about more than just saving butterflies. She sees it as an opportunity to teach the children about life.

“We want to get the kids to understand the world and how little changes you make can make big changes to something,” she said.