Shannon Lynn Kelley Johnson, 55, of Glen Allen, Virginia—and formerly of Albert Lea, Minnesota—went to be with the Lord on June 10, 2021. 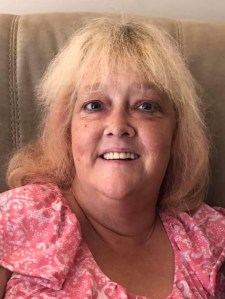 Born December 18, 1965, Shannon spent much of her early years facing a series of orthopedic surgeries to treat her cerebral palsy. However, she never let her diagnosis hold her back or define her—participating in band and choir and giving a memorable performance as the Wicked Witch of the West in the Lake Mills High School production of “The Wizard of Oz” during her youth, leading a fulfilling career in long-term care, and taking on the roles most important to her: mother and grandmother.

Shannon graduated from Lake Mills High School in Lake Mills, Iowa, in 1984 and earned her CDM/CFPP certification through the University of North Dakota in 2006. As dining services director at several long-term care facilities, Shannon enjoyed building relationships with her team and the residents she served.

Through her marriage to James Jahnke, Shannon was blessed with two children, Tyler James and Destiny Lynn. Their union later dissolved—and, in April of 2000, Shannon married Charles Johnson. The two lived in Albert Lea before relocating to the suburbs of Richmond, Virginia, where they eventually separated.

Shannon loved to sing—going on to lend her musical talents to church worship teams and the Eagles Cancer Telethon. In her later years, what she enjoyed most was spending time with her two grandsons, Joshua and Zachariah.

Shannon is preceded in death by her parents, Roger and Sandra Kelley; aunt Patty Rasmussen, uncles Dennis Boe and Richard Kelley, and her maternal and fraternal grandparents.

A celebration of Shannon’s life will be held on Saturday, July 10th, at 2 p.m. at New Life Christian Church (1705 SE Marshall Street) in Albert Lea, Minnesota.