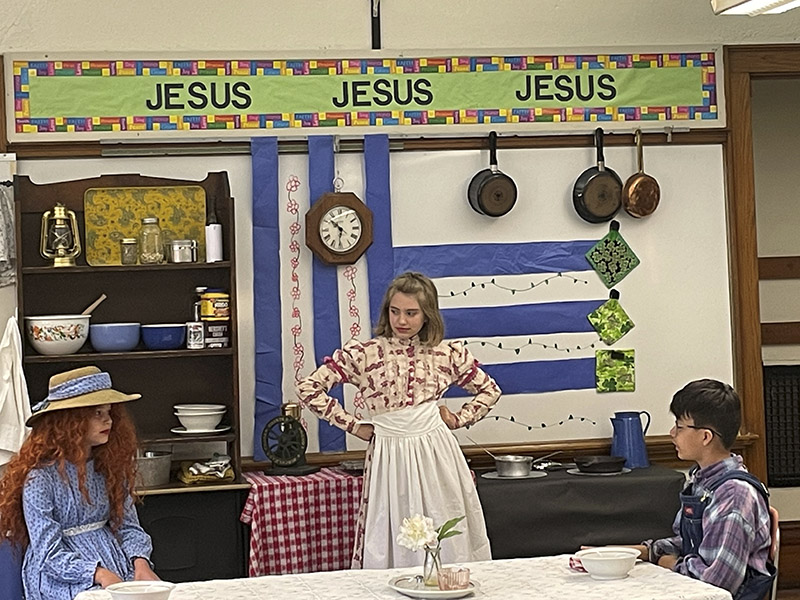 The students and visitors to the fourth-sixth grade St. Casimir’s School classroom in Wells were recently treated to a production of “Anne of Green Gables” and the theatrics of the story’s main character, red-headed Anne Shirley.

The story begins with farming brother and sister, Matthew and Marilla, who need help on their Canadian farm called Green Gables. Matthew (played by Jaiden Aranda) goes to town to find an orpan boy, who turns out to be Anne (played by Brynley Yokiel). Shy Matthew is charmed by this outgoing girl and decides to keep her even if she isn’t the boy he and his sister were expecting. However, Marilla (played by Kylee Koziolek) isn’t so easily swayed and has many rules of conduct for Anne to follow. The impulsive Anne has several misadventures including turning her hair blue after buying a special potion from a traveling salesman (Seth Adams) and accidentally putting cough syrup into a special cake she made for the reverend and his wife (played by Paul Romano and Claire Schimek).

The play was put on under the direction of director Lea Nowak and student stage director Josie Chavez. Provided

Thankfully, she discovers a firm friendship in Diana (Priscilla Romano) who helps her through the rough spots. As in all good stories, Anne’s antagonists are eventually won over, and Anne finds a forever home at Green Gables.

The students not only studied hard to learn their lines and remember stage instructions from play director Lea Nowak and the student stage director, Josie Chavez, they also created an elaborate set and scavenged for props.