‘A beacon’ for rural America 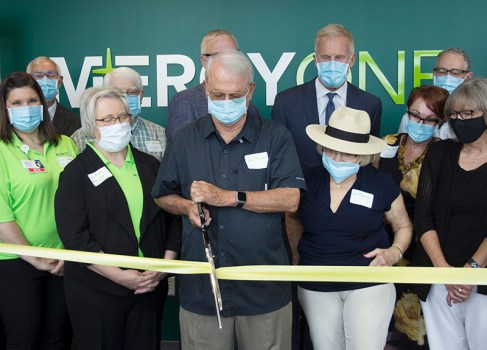 John Morrison cuts through the ribbon at the ceremony of the new MercyOne Albert Lea Family Medicine & Specialty Care clinic in July. Morrison and his wife, Susan, were key donors to the project. Abigail Chalmers/Albert Lea Tribune 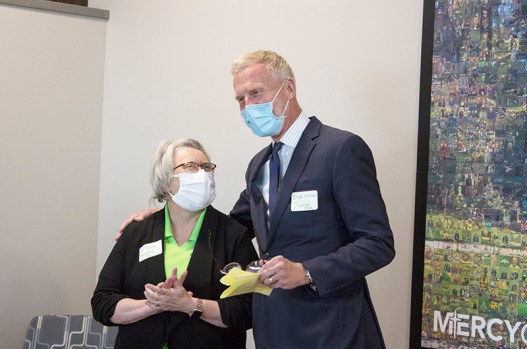 Arends gave a short speech recognizing many of the people who had lent a helping hand throughout the process before turning over the floor to MercyOne Medical Group Vice President Teresa Mock. Abigail Chalmers/Albert Lea Tribune 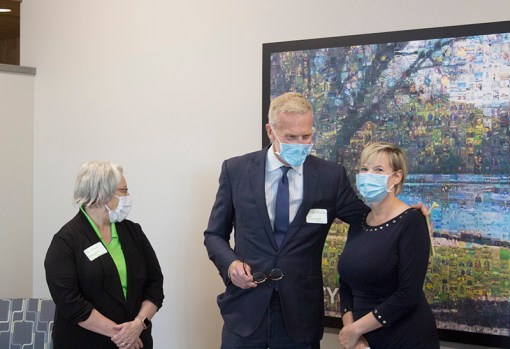 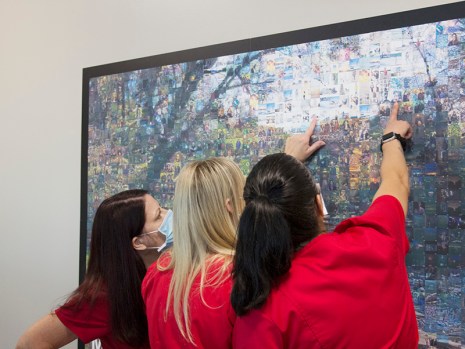 Three MercyOne nurses admire the collage in the lobby. The work is made up of small photos and creates a woodsy scene. Abigail Chalmers/Albert Lea Tribune 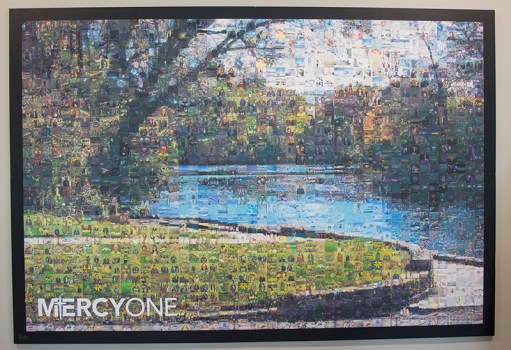 A new picture hanging in the lobby of the new clinic was made with photos of area residents from along the journey of building the clinic. Abigail Chalmers/Albert Lea Tribune

Albert Lea-Freeborn County Chamber of Commerce Ambassadors and other local, state and federal officials celebrated the completion of the new MercyOne Albert Lea Family Medicine & Specialty Care Clinic Wednesday with a ribbon cutting ahead of this weekend’s public open house.

The clinic, which is made possible through a partnership between the Albert Lea Healthcare Coalition and MercyOne since, will offer a primary care clinic, visiting specialists, lab and radiology services. It is inside what is now known as the John & Susan Morrison Medical Plaza at Northbridge Mall.

“This is really, really exciting,” said Albert Lea Healthcare Coalition President Brad Arends in a small ceremony before the ribbon cutting. “It is a testament to what a dedicated, unified community can do with a major health system in helping to conquer the crisis in rural health care that really is hitting all of America.

“I think we’re a beacon today — of an example — of what can be done in rural America.”

The clinic is a culmination of a grassroots effort that started about four years ago after Mayo Clinic Health System in Albert Lea leaders announced that most inpatient services would be consolidated between the Albert Lea and Austin campus, moving overnight hospital stays, inpatient surgeries and labor and delivery to the Austin campus.

Though residents initially tried to save the services that were being moved from Albert Lea through the health system, they eventually shifted their efforts to instead recruit a new provider to the area. Nonprofit Albert Lea Healthcare Coalition was formed, and it purchased the former Herberger’s building at Northbridge Mall, partnering with MercyOne North Iowa Medical Center to open the new clinic in Albert Lea. The purchase was made possible through a $1 million donation from John and Susan Morrison. The coalition will remain owners of the building.

The clinic will be built in phases, with the first phase opening in July to include a primary care clinic, urgent care, a specialty clinic and MRI capabilities over 14,000 square feet. Specialties include ear, nose and throat; urology; cardiology; sleep medicine, weight management/bariatrics; dermatology; neurosurgery; orthopedists; podiatry and plastic surgery. Potential specialty services include pediatrics, mental health, internal medicine and a dietitian.

As patient load increases, the clinic will expand, with the eventual goal of an ambulatory surgical center by the fifth phase.

Arends spoke highly of the partnership with MercyOne and said there are two other medical companies also confirmed to be in the medical plaza.

Teresa Mock, one of the vice presidents for MercyOne, said the clinic will be opening with two doctors, David Heine and Brittany Waletzko Bartz and will have a few nurse practitioners starting in the next few months.

Mock said she was amazed at how the clinic turned out from where it started with a cardboard prototype. Though the project was laid back a little by the COVID-19 pandemic, it is going strong now, she said.

The Morrisons, who were in attendance at the event, said they hoped their contribution would be able to help the health care in the community. They said rural health care is important for many things in a community, including for recruiting businesses.

John Morrison said he was proud of his upbringing in Albert Lea and was proud to be a part of the project.

Shari Jenson, executive director of the Albert lea-Freeborn County Chamber of Commerce, said she was excited to be there for the ribbon-cutting and was pleased to see all who came out to show their support. The lobby in the new clinic was filled.

The clinic is the first location for MercyOne in Minnesota and will open to patients on Monday.