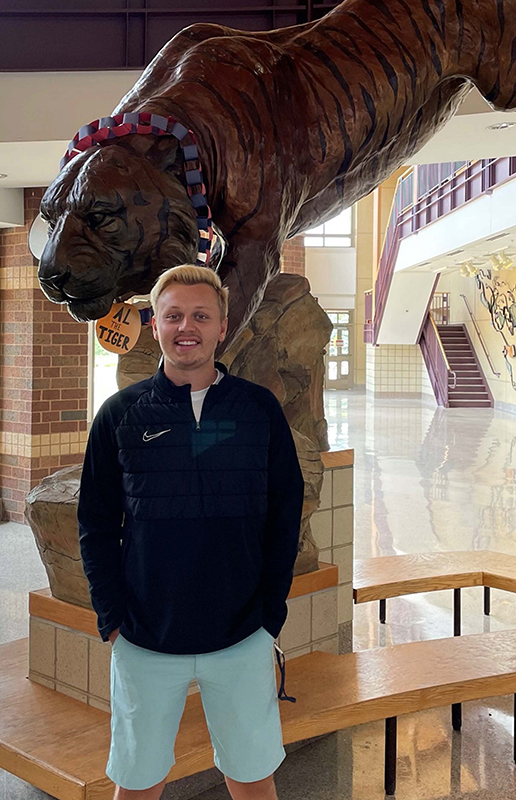 Harrison Koetz, originally from North Dakota, has been heavily involved with athletics from a young age. In high school, he played baseball and basketball in addition to running track and cross country. During his time at Valley City State University, from which he graduated with a degree in physical and health education, Koetz delved into the coaching world, taking up an assistant coaching job with his former high school’s basketball program.

Koetz moved to Albert Lea and began working at Halverson Elementary School during the 2020-21 school year. He quickly became involved with coaching in several sports programs, including basketball, golf and junior high football. Koetz also coached an Amateur Athletic Union (AAU) basketball team and has been holding workouts for the high schoolers twice a week this summer. He said that he feels his prior experience in coaching, both before he arrived in Albert Lea and since he has been here, has prepared him to take on the head coaching role.

Koetz’s vision for the program centers around consistency, especially in regards to the coaching staff.

“I think there just needs to be consistency there,” he said. “There have been a lot of coaches that have come and gone, so I think having a coach hopefully this year and then years forward will help have a consistency for what our program expects.”

He also wants to see Albert Lea play to their strengths and find what works for them in the competitive Big Nine Conference. Koetz noted that, as the third smallest school out of the 12 conference teams, Albert Lea struggles to find as many players as some of the larger schools. Because of this, he wants to focus less on trying to do what works for other teams and instead try “to do our own game and make our own path” and succeed in that way.

Koetz believes that an integral factor in the Tigers’ success this season will come with fan engagement, a component of the game they lacked last year due to the pandemic. He also wants to see student involvement with the team in the student section, pep band and through national anthem performers.

“I think for our program to be as successful as possible, we need the support of our community and need to be backed by Albert Lea,” he said. “So, get out to as many games as you can and show support.”