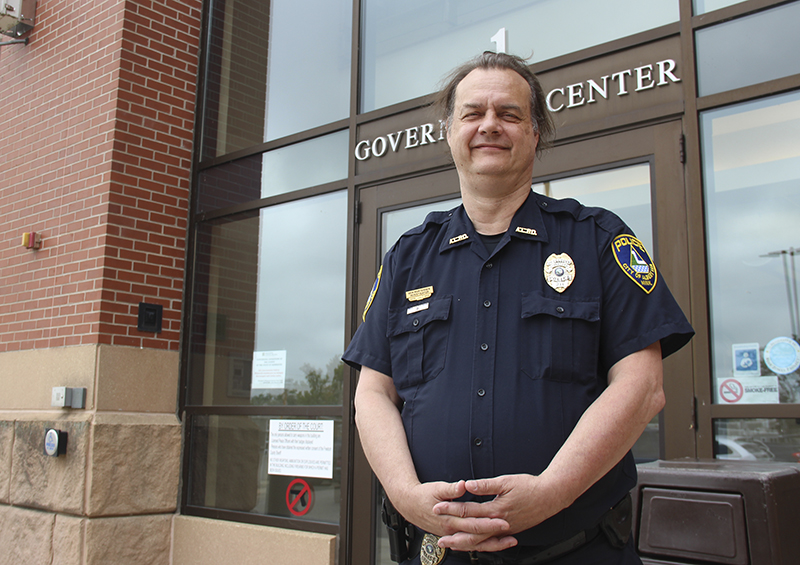 Detective Ben Mortensen has worked for the Albert Lea Police Department for 30 years and in law enforcement for about 40. Sarah Stultz/Albert Lea Tribune

When New Richland native Ben Mortensen first decided to become a police officer, he got into the profession because he wanted to make a difference.

Mortensen, 62, said he had a good friend who was a police officer in New Richland who helped get him into the profession. He said he thought because he liked to work outside he would be good for the job because it gave him the opportunity to be out in the community and do new things each day. He didn’t want to be in an office all day, every day.

In Alden he worked as the chief of police, which was also the city’s sole police officer, and in Albert he started out on patrol, before being promoted to detective in 2000. He said when he worked in Alden, he became interested in conducting investigations and did as much investigating as he could there.

“It was interesting — it’s like putting a puzzle together,” Mortensen said.

He has investigated everything from fraudulent check cases to homicides, child sex crimes, child abuse, burglary, child protection, forgeries, serious assaults and kidnappings — essentially anything on the gross misdemeanor or felony level.

He recalled four months after he got promoted to detective he investigated the death of an 18-month-old child. He said he worked on that case every day he was at work for over a year with the help of the Minnesota Bureau of Criminal Apprehension. A man was ultimately convicted for the death and is serving life in prison without parole.

He also helped investigate three other homicides, and he said it has been satisfying at the end of the trials to help the families of those victims achieve justice for their loved ones’ deaths, he said. He noted the family of one of the people who was killed still comes up to him and thanks him for his work he did on their loved one’s case.

He noted he is grateful to have the BCA in Minnesota and for their knowledge and expertise and that he has worked for a department that has supported ongoing training through the years.

He said working through the COVID-19 pandemic brought a whole new set of challenges, as more interviews had to be done of both suspects and victims over the phone. He also talked about the stress that has come in recent years as there have been several high-profile cases involving law enforcement.

Mortensen said he has worked with police departments from all 50 states, as well as all the federal agencies, and he has enjoyed worked with people of all races through the years.

“There’s always been a bad apple in the bunch — in every profession,” he said. “Concentrate on the good people and do what you have to do to the bad.”

He said for him, it has not mattered what race someone is when it came to his job.

He has appreciated the support law enforcement has received in outstate Minnesota and in Albert Lea and said what he will most miss is the people he has worked with.

“I didn’t stick in this job just for the money, I stuck with it because I enjoyed it. But it’s time to move aside for the younger ones to move up.”

J.D. Carlson, Albert Lea Police Department director of public safety, said it was difficult for him to express his words of appreciation for what Mortensen has provided both the police department and the city through his years of service.

“Ben was my second phase field training officer, instilling in me the importance of completing detailed reports, the senior officer I could rely on, and later an investigator I could turn to for whatever magnitude of concerns arose,” Carlson said. “His service, support and mentorship provided me the opportunity for growth, and I’ll always cherish the experiences and times shared.”

Mortensen said he looks forward to making up a lot of missed time with his wife, Deb, traveling and enjoying hobbies of photography and studying the Civil War.

Just as he enjoyed a challenge at work, he said he hopes to keep challenging himself in new ways.