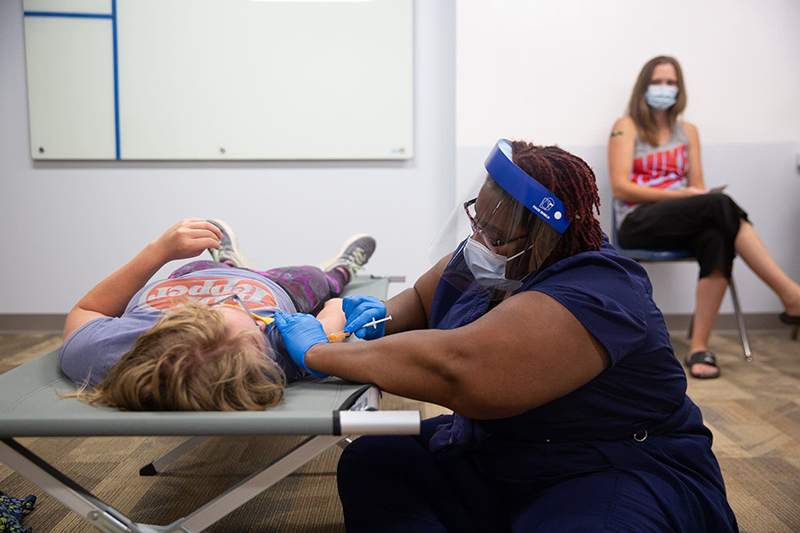 In a classroom at Lionsgate Academy, a video of someone drawing circles, pouring water, and breaking strands of uncooked spaghetti plays on a loop on a large screen.

School Executive Director Diane Restorff explains it’s the sensory room — just one feature of a vaccine clinic aimed at kids who are on the autism spectrum, or who are otherwise very nervous to get shots.

“It’s for kids who are feeling a little nervous or need to wait a little bit,” she said.

At this Minnetonka charter school designed to meet students on the autism spectrum, vaccination rooms are private and quiet. Kids aren’t rushed through the vaccination process. Staff, who are used to working with these students, are on hand to help calm kids down if necessary.

And the site is emblematic of Minnesota’s latest approach to getting people vaccinated. Just a few months ago, the state was launching massive COVID-19 vaccine clinics for anyone who was eligible. But as demand for shots has declined, public health officials are focusing on clinics that are small and targeted to specific, sometimes hard-to-reach populations.

Earlier this year, as she was volunteering to give shots at some of the large, state-run vaccination sites, she realized that set-up wouldn’t work for her students, who are easily overwhelmed by big, noisy, overstimulating and unfamiliar settings.

“It’s loud, there’s a lot of pressure with a lot of people,” she said, “The anxiety for a lot of them goes through the roof.”

Instead of asking people to go to a pharmacy, health care facility or large-scale clinic for a vaccine, she said public health workers are bringing vaccines to them — usually in places that are familiar and comfortable.

“Hennepin County has looked at some creative ways to be able to get ourselves into spaces and provide vaccine in unique ways,” she said.

The percent of eligible Minnesotans with at least one dose of the vaccine has remained stubbornly around 65 percent in recent weeks, and Drier-Sutton says tailoring clinics to meet the needs of specific populations has become even more important.

“We’ve had to be creative, whether it be incentives, whether it be reaching out to communities that don’t have their own space, helping them get the space to be able to fulfill that. Or maybe there are other access barriers we are unaware of,” she said.

On this day, 16-year-old Lucas Ashley is getting his second shot. His mom, Allison Ashley, says that in the past, she’s had to restrain Lucas for vaccinations.

But as a nurse asks him to roll up his sleeve, Lucas is calm.

Lucas is here with his twin sister Isabelle, who’s also getting her second shot. Both are on the autism spectrum and attend Lionsgate.

Allison Ashley says that being able to vaccinate her kids in a familiar spot relieved stress for her — and her kids.

“We’re all super familiar with the place. And we can just walk right in, they’re comfortable,” she said. “Their own staff, their own nurse is here, in case anything were to happen — that was really appealing.”

After Lucas Ashley is done, he heads to the observation room to grab a snack and a drink. He says that in the past, he was far more anxious about getting shots.

“I’ve been anxious about needles for a while,” he said. But being at Lionsgate made it easier. His fear, he said, “was easy to overcome.”

While protecting Lionsgate students against COVID-19 was top of mind for Prenevost, she also said that her students had a much harder time engaging with the technology necessary for distance learning.

“Distance learning is tough for everybody, but for kids on the spectrum it can be enormously challenging,” she said. “So getting my kids back in this building, vaccinated? It’s essential to having a normal school year next year.”

Prenevost said Lionsgate students learn much better when they can be in the classroom, and these shots are the first step toward getting them there.