Behind the scenes in response in a year with many emergencies 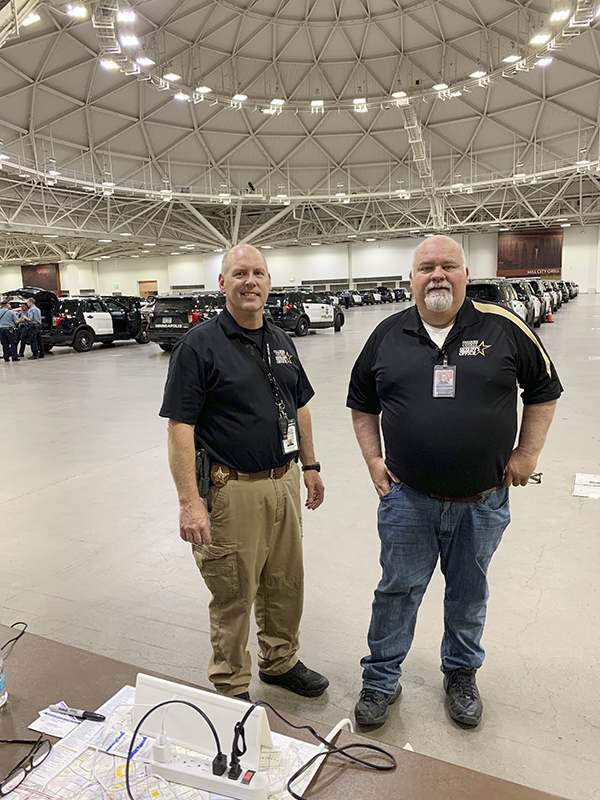 Much of the work Freeborn County Emergency Management Director Rich Hall, at right, does, he says, is behind the scenes, in both preparation and response. Here he is while helping in the response after the death of George Floyd. Provided

Whether it be responding to COVID-19, an active shooter incident or civil unrest in Minneapolis, Freeborn County’s emergency management director has had a busy last 16 months

When Freeborn County Emergency Management Director Rich Hall began his emergency response in March 2020 at the start of the COVID-19 pandemic, little did he know that the pandemic would not be the only major emergency he would respond to over the next year.

In most years, a global pandemic would top the list in response for any emergency management director, but for Hall it was just a piece of a busy year with one emergency after another.

After the pandemic started, then came the death of George Floyd in Minneapolis in May, and Hall was called up to assist Homeland Security and Emergency Management Director Joe Kelly with bringing in a team to lead credentialing in the response to the unrest that followed.

Efforts then shifted back toward COVID-19 and setting up vaccination clinics with the Public Health Department, followed by the Union Pacific train derailment in May.

“Police get a lot of credit, but sometimes people don’t look at the main infrastructure, the support,” Freeborn County Chief Deputy Todd Earl said. “If we didn’t have Rich, things would be a lot more difficult for us.”

Hall’s leadership has come from years of experience in emergency response and years of building relationships across the state.

He spent a combined 30 1/2 years on two fire departments, 15 years as an ambulance director, 12 years as the mayor of Elgin and 22 years in the Army National Guard.

“If there’s one guy that knows almost everybody, Rich is about as close as it gets,” Earl said. “He has contacts everywhere throughout the state.”

Hall said in March 2020, he and Public Health Director Sue Yost established a unified command in response to the pandemic, putting together an incident action plan.

He said his main goal was taking care of anyone in a congregate setting that needed personal protective equipment — whether that be staff or residents. This included everywhere from nursing homes and assisted living facilities to the Freeborn County jail. Another top priority was taking care of the county’s employees.

He helped establish protocol in the jail early on to prevent COVID from getting into the jail, which he said was successful as there were only minimal cases reported.

He said gloves and N-95 masks were difficult to find at the start — with the shortage on gloves lasting the longest.

He tracked down gowns and masks initially out of Texas from an old military contact, and then found suppliers in New Ulm and the Twin Cities that started making gowns.

POET donated a 430-gallon tank of hand sanitizer, and before that he had gone through a distillery in Harmony for sanitizer.

He said he also ran over to Rochester to pick up supplies and would go to stores early in the morning to find supplies. He credited Raleigh’s Ace Hardware, Home Depot and Lowes with helping the county find supplies.

He estimated he probably disseminated 30,000 N-95 masks and 60,000 other masks, though he said he quit counting because it got to be so much.

Earl estimated the number was much higher.

“It would have been much worse if Rich wouldn’t have been able to track this PPE gear down,” Earl said. “The Sheriff’s Office was a small part of it, but what Rich did for the elderly community was absolutely huge.”

He said other counties came to  Hall for guidance and together they shared ideas as the pandemic went on.

Hall said he also worked closely with day care centers to help them with anything they needed, such as toilet paper or disinfectant, so they could continue child care for the essential workers.

The Sheriff’s Office transport deputies were busy hauling supplies to these providers. 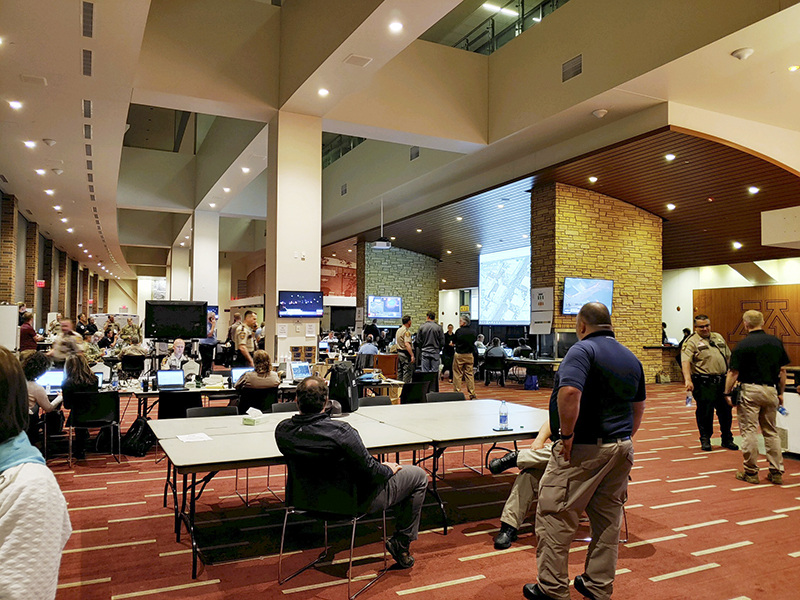 Hall helped lead a team in credentialing during the law enforcement response in the days following the death of George Floyd in Minneapolis. Provided

On May 29 after the Minneapolis 3rd Precinct was burned down after the death of George Floyd, Hall said he received a call from Kelly, who he had known from his time in the military, asking if he could help get a multi-agency command center set up and assist in credentialing for the law enforcement who were to respond.

He was asked to bring a team of people up with him, so he contacted several counties, including LeSeur, Waseca, Fillmore, Winona, Rice and Faribault counties to assist. He said he had 13 different agencies that helped.

He worked out of the former TCF Bank Stadium at the University of Minnesota and also had other people working out of the Minneapolis Convention Center and the Minnesota Department of Transportation building in Richfield.

As the call went out to outstate Minnesota for help, the agencies would email him with what gear and equipment they had, as well as their training and he would help get them set up with where to respond.

He also helped organize bringing in food and portable air conditioning units for the responders.

In addition to the various law enforcement officers from around the state, there were representatives from the Secret Service, the Bureau of Alcohol, Tobacco, Firearms and Explosives, the FBI, the Bureau of Criminal Apprehension and the Minnesota Department of Public Safety.

He said the credentialing system that the region has was able to be used during the response, and the state has since decided to take on the system as well.

Earl said it speaks volumes to know that Hall was one of the first people Kelly called to organize the command center.

Booker T. Hodges IV, the multi-agency command center incident commander and the assistant commissioner of the Minnesota Department of Public Safety, thanked Hall for his help in a letter later in June.

“The civil unrest following the death of George Floyd presented our state with an unprecedented challenge, one of which has not been seen in over a generation and hopefully we will never see again,” Hodges wrote. “The damage in property, loss of life and community cohesion were significant because of this event, but they could have been much worse without your help.”

After responding to the unrest for 10 days, Hall said he was back in “COVID mode” until the active shooter incident at Shady Oaks  on Nov. 29.

Some of his duties that day included evacuating the 120 people who lived there, finding a place for them to go and keeping them fed.

He helped set up a family assistance and reunification center at United Methodist Church.

Hall said he is fortunate to have people like John Mitchem, pastor at the church; Yost; and Department of Human Services Director Suzi Nerison, who he knows he can count on, who also played a critical role in that response.

They worked closely with Jeanne Leick, director of the Albert Lea Housing and Redevelopment Authority who oversees Shady Oaks, to work on accountability of the residents. Yost helped with medications and mental health concerns, and Nerison is still doing some longterm care with mental health with some of the residents there.

While many of the residents were able to return to their apartments, all of the third floor residents had to stay at a local hotel until the investigators had concluded their work.

He credited the relationships that have been built with companies including the Albert Lea Bus Co. and Smart Transit, which assisted that day as well.

Four days later, with the large warehouse fire near the west Main Street viaduct, Hall said he was tasked with helping residents of 13 homes near the warehouse find housing and helping them obtain access to their medication.

He said he has been able to find success while in the position because of the relationships he has built over the years and credits the help he has received from his partners.