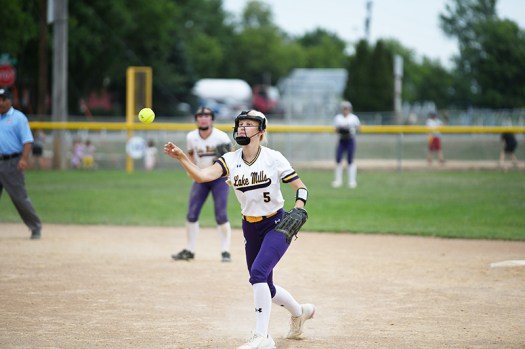 Lake Mills junior Leah Moen makes the easy throw to first for the out Tuesday night against Manson-NW Webster. The Bulldogs fell to the Cougars 10-6. Tyler Julson/Albert Lea Tribune 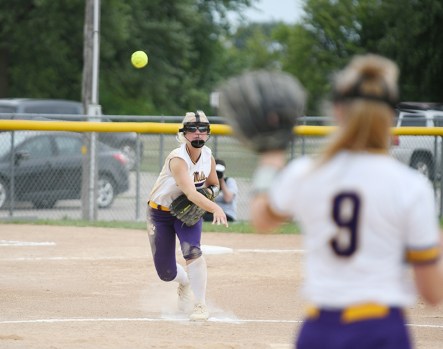 Junior Annabella Jensen makes the throw from third base Tuesday at home in the first round of the regional tournament. Tyler Julson/Albert Lea Tribune 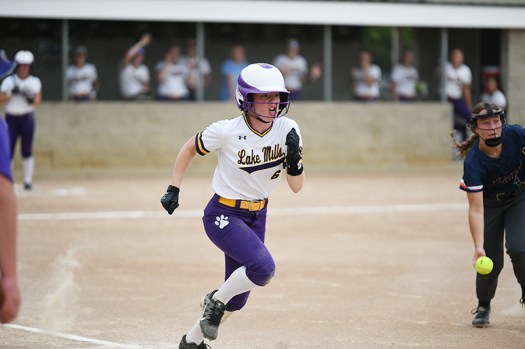 Sophomore Natalie Brandenburg runs out a play at first base Tuesday night against the Cougars. Tyler Julson/Albert Lea Tribune 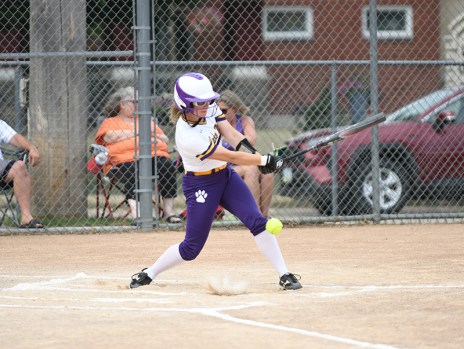 Sophomore Finley Rogstad drills a hit up the middle for a single Tuesday at home. Tyler Julson/Albert Lea Tribune

LAKE MILLS — The Lake Mills softball team entered the first round of the Class 2A regional tournament at home Tuesday night, taking on a scrappy Manson-NW Webster team.

While both teams struggled at the plate through the first few innings, the Bulldogs and Cougars traded the lead back-and-forth numerous times late in the game. When the dust settled, it was the Cougars who came out on top, using a five-run seventh inning to defeat the Bulldogs 10-6.

Freshman Scout Kohagen started in the circle for Lake Mills and played the entire game there. Kohagen recorded a strikeout in the first at-bat of the game, setting the tone for the rest of the game.

Sophomores Finley Rogstad and Madison Edwards reached safely in the bottom of the first inning, but were left aboard after a pop fly and ground out ended the inning.

Only two baserunners made it in on for both teams in the second and third innings combined. Both were by the Cougars in the top of the second.

The first run of the game came across the plate in the top of the fourth inning. As a Cougar player reached base on an error and was advanced by a single before coming in on a wild pitch. The Bulldogs got two singles in the bottom of the inning but were again held scoreless.

The Cougars extended the lead by two runs in the fifth, using four consecutive singles to score the two runs.

Finally, in the bottom of the fifth inning, the Bulldogs scored their first runs of the game. Freshman Taylor Vanek started off with a hit-by-pitch and was followed by a double from junior Annabella Jensen two at-bats later. After Vanek was called out attempting to steal second, sophomore Natalie Brandenburg then hit a triple, scoring one run. Rogstad followed up with a single, scoring the second run.

The Cougars did not falter in the next half inning, adding another two runs to their total, using a double, single and walk to do so.

The Bulldogs came back in a big way in the sixth inning. A single by junior Kit Byars and an error and a walk from junior Leah Moen loaded the bases with two outs. Jenen then hit a two-RBI single, and was followed by back-to-back RBI singles from Brandenburg and Rogstad. The four runs gave the Bulldogs their first lead of the game 6-5.

With their backs against the wall, the Cougars answered back with a five-run rally to then take a 10-6 lead into the final half inning of regulation.

The Bulldogs got two runners aboard in the seventh, but it wasn’t enough to pull off the comeback.

Kohagen pitched all seven innings, allowing 10 runs on 13 hits, while striking out 11 and walking three.

The Bulldogs finish the season with a 12-12 overall record and will lose no seniors from the team as they look to build on this season in 2022.